Search for pictures of the orange Adidas Tango ball on Google and take a look at the results.

There, ahead of a beautiful Liverpool FC programme cover featuring Ian Rush at a snowy Anfield, the vivid ball at his feet looking almost photoshopped against the drab, white background of a snow-covered pitch, are several images of the ball itself.

Amazingly for a game now on the fringes of football culture, nearly all of them are the Subbuteo variety.

From blister packs to recreations of snow-covered Subbuteo pitches, the finger-flicking game has become synonymous with perhaps the best-loved ball in football history.

It is probably the only Subbuteo accessory where the 00-scale item is maybe more famous than the original.

A quick glance at Google results show several articles about the balls. Nearly all mention the Subbuteo variety including this beautifully-written article on the Sportsman:

“Its function was the same as any of its counterparts but aesthetically it was a stunner, inspirationally so.”

“How strange it is when reason is brought into it that a tiny piece of hardened plastic can emotionally mean so much but there has been a ten-minute gap between writing the previous sentence and this one because I’ve just bought some off eBay for a silly amount. The heart wants what the heart wants.”

But why is the Subbuteo Adidas Tango ball so loved? And why is it never far from a Subbuteo reference?

The hashtag #orangeball is currently a lively place on Twitter. As snow hits much of the country fans of the good old days are reminiscing about when the likes of the aforementioned Rush would take to white pitches in blizzard conditions to compete.

The arrival of snow did not call games off – instead it meant a switch to an orange ball. Luminously bright, it was an icon for those who love football in the snow and a certain era that is now fondly remembered by those of a certain age.

In short, people loved the orange ball and the Adidas Tango was the best orange ball ever produced. 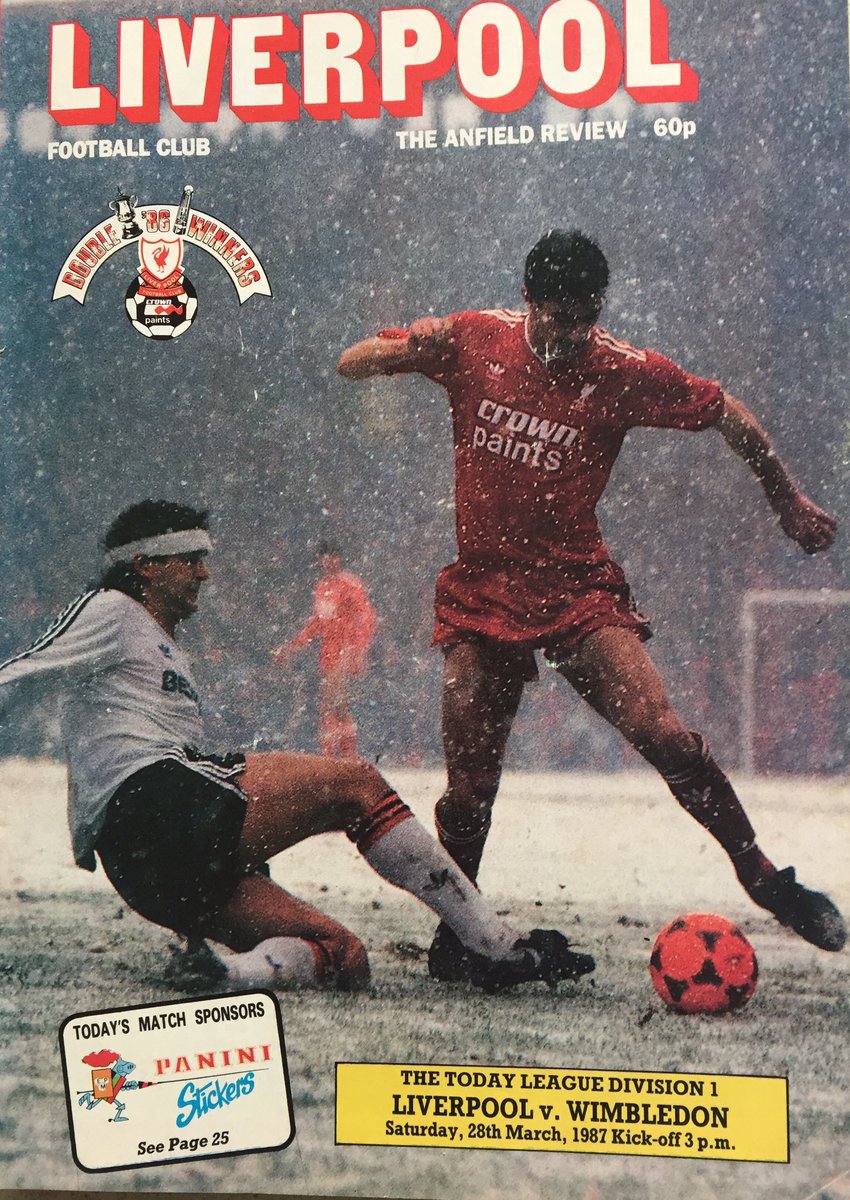 The white version first appeared in 1978 as the new wave of modern panelled footballs. From Paulo Rossi’s stunning World Cup final hat trick in 1982 to Marco Van Basten’s beautiful volley for Holland in 1988 the Tango was at the centre of hundreds of wonderful football moments.

It would be hard for fans to not associate the ball with beautiful football and fall in love with it.

At the time of its release and in the next decade Subbuteo was growing as a hobby and a sport. Accessories for collectors were being expanded and the various advertising motifs played on creating a real game experience – a police advert called for players to ensure their static plastic crowd was under control for example – so it is no surpise licensed balls were released. 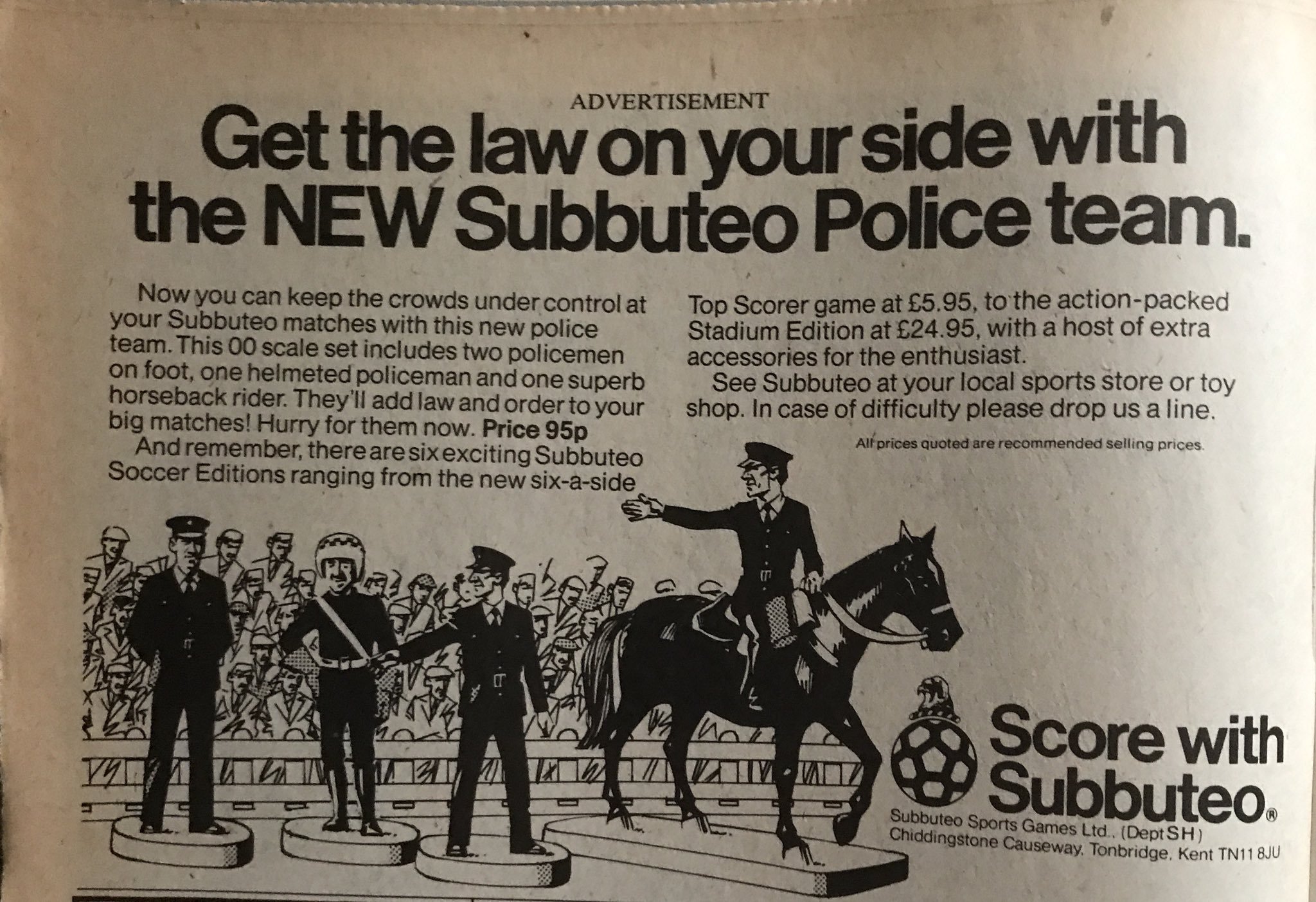 The white Tango balls were light, well weighted and the correct size for chipping the ball and became popular with players.

There is something magical about flicking your striker and seeing it evade the keeper’s grasp. The orange ball thudding into the stanchion of the goal or softly stretching the back of the net. There are many factors in why it is so satisfying but the bright streak of orange as it flies towards goal is certainly one of the most emotive.

The orange balls were the hipster’s choice – a stylish, iconic set of three balls at a price that was around a hundredth of the cost of the actual ball.
Made in big numbers, it instantly became a must-have for all Subbuteo players and you can easily get one on eBay for less than £10.

Perhaps it was the fact so many people bought, played and loved the Subbuteo version that it became instrinsically linked with the game.

Perhaps it was the introduction of garish yet boring yellow ‘winter balls’ throughout the league that meant fans dug out their Subbuteo collection to reminsice about the beautiful, understated Tango orange balls.

Perhaps it was that they were immensely playable – a recent Twitter poll ranked them as the best Subbuteo ball ever created.

Perhaps it was a mixture of all three. But the fact remains the Adidas Tango orange ball, perhaps more than any other accessory

in the Subbuteo range, has almost transcended the hobby. When you think of the stylish orange ball, you will invariably think Subbuteo.