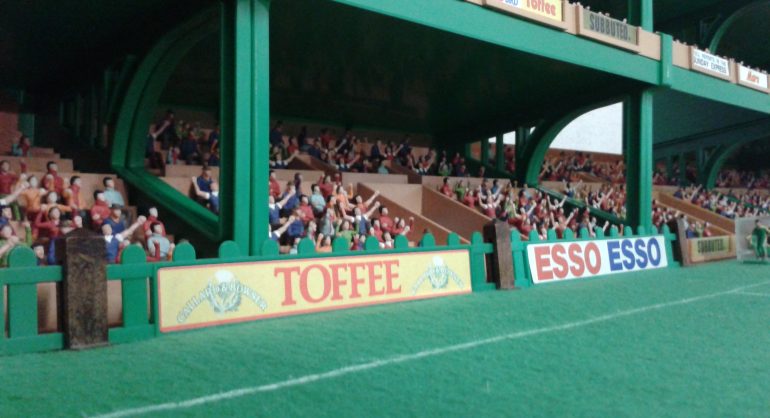 Every lapsed Subbuteo player has a similar story; they had Subbuteo and a few teams as a child but they always wanted a full stadium.

Very few people did back in the 1970s and 1980s – but many have now completed the lifelong dream of owning a complete Subbuteo stadium.

A reader of the blog in Italy emailed us while in lockdown to share just that.

Roberto Di Carlo is currently in lockdown in Italy but stumped across the site and decided to share his stadium.

He says: “In this period where you are forced to stay at home I visited your site. It’s very nice and interesting so I have sent you some photos of my Subbuteo stadium. It is all made with original material and more than 3,000 hand-painted spectators.”

Roberto’s stadium uses the original Subbuteo grandstands. For a complete stadium you would need six stands for each side and three terraces for the ends.

Corner sections, also sold around that era, can also be added to complete the look.

Unlike modern stands, the green grandstands complement the green pitchside fencing and add a dose of classic English stadium glamour to the Subbuteo occassion. And, as Roberto shows, it helps to create an atmospheric picture.

A total of 3,000 hand-painted fans fills the stadium, which is quite the feat considering they come in unpainted packs of 50.

A full Subbuteo stadium could potentially hold 12,000 figures but Roberto has spread them out nicely to make it look like a bumper crowd.

We share a lot of custom designed stadiums but this is a reminder that sticking purely to official Subbuteo can have an impressive effect if done correctly.