The classic Subbuteo heavyweight team poster is one of the most recognisable accessories produced by the brand.

The poster showed all of the team colours produced by Subbuteo at the time and was not only informative but was one of the most stylish and sought-after parts of Subbuteo collecting.

A pristine poster would be popular with most collectors, but one Subbuteo fan has gone even further and produced a work of beauty based on the heavyweight poster design.

OldhamBlue in the Subbuteo forum has used a single player from each heavyweight box set to produce a stunning one-off display that is everything we love about the game. 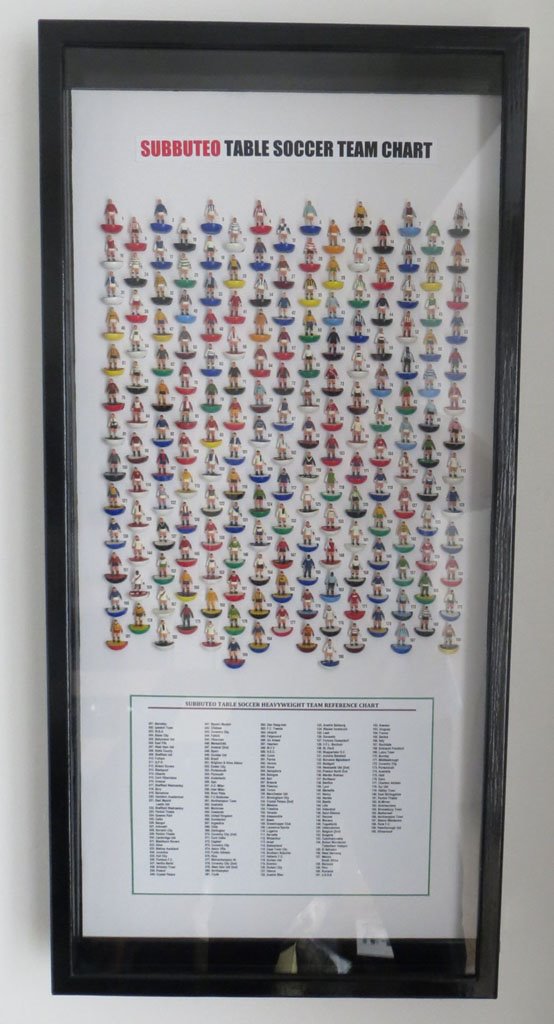 He kindly gave us permission to use the image and said: “This is my second display cabinet using foamboard to hold the figures in place. I used a slab of normal foam in my first effort quite a few years ago now, and I found that it wasn’t ideal in holding the figures securely as it tended to ‘push’ the figures out from the display. Plus I wasn’t particularly happy with my initial results so decided to come up with something more aesthetically pleasing so that my wife would agree to having it hung up in our lounge!”

The poster is his second attempt. He added: “No doubt the more eagle eyed will have noticed that my display is missing the classic Ref 61 claret kit version and my Ref 148 Monaco is the second version with the red shorts and socks. I always thought that my original display (which had been unceremoniously placed to one side in my attic study for a number of years)was complete as per the classic catalogue poster!”

He is looking for spares for the two teams mentioned to fully complete the display.

What a fantastic DIY project and another superb way of showcasing the beautiful world of Subbuteo colours – just days after we shared a similar spectacular single player display on Subbuteo.Online with over 1,200 figures.