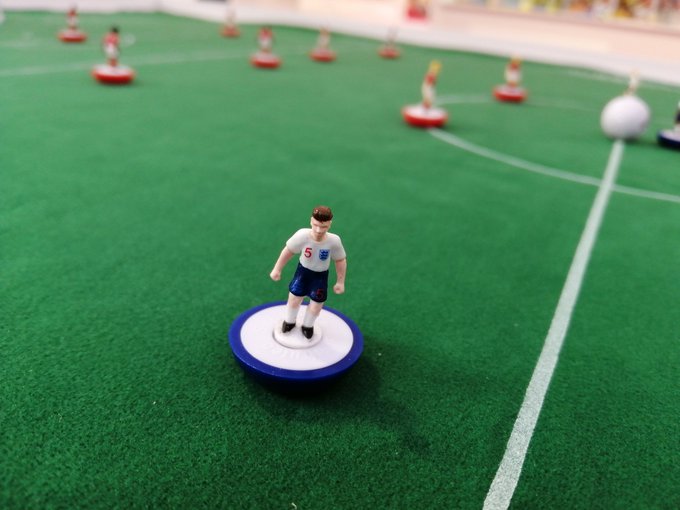 Why Hasbro chose a little-known Hong Kong company for Subbuteo

It was late in February when an anonymous note landed in our inbox telling us the Subbuteo license had been acquired by a company in China.

“In Madrid the office is closed, no staff, all streets empty. All over. University Games are buying from China now.

“The UEFA license is ending and there is no new stuff for kids. Without that the game will die.”

It was not the most promising news to receive but the claims were only half right – the license had been acquired but it was actually a company in Hong Kong called Longshore. No sooner had the news broke then the official Subbuteo account changed its location and sent some cryptic tweets about Subbuteo making a comeback.

It seems like an abrupt end to Eleven Force’s license especially after the popular new Winter Pitch sold out instantly when it was launched in January.

A second source, close to Eleven Force in Spain, then contacted us to give a more positive picture of what had gone on.

It said: “I think their hand was forced by Hasbro who were unhappy with their lack of market growth. Their lack of confidence in doing anything outside of Spain was a huge problem.

“They are working on better marketing practices, including working alongside national FAs, clubs, coaches and the toy market. Proposed production schedules should see more readily available stock, and a broader product range.

“This will take time, but I can assure you there is a brighter future for the brand.”

The facts are that Longshore, a Hong Kong-based toy manufacturer, now owned the Subbuteo license on behalf of Hasbro. The UK distributor, University Games, was working with Longshore to give us some new sets.

It is clear Hasbro needed a company they could trust to handle the Subbuteo brand. But who are Subbuteo’s new license holder? And does a little-known Hong Kong company mean Hasbro has given up on the brand for good?

At first glance Longshore have very little footprint. The nondescript office on Google Maps looks more like a residential address, while searching on Amazon for products they sell turns up some other curious items including a Just Bieber Backstage Pass Game, a ‘Secret Millionaires’ Club Game and
a sewing game with a one star out of five rating.

But there is a lot more to Longshore than this. In fact, the answer to what they have planned for the Subbuteo license, bizarrely, lies in a toddler’s game that rose to popularity with students in Germany.

First of all, Longshore is a legitimate company. Founded in 1978 by Michael Or, it grew by securing contracts from major US toy brands to manufacturer parts for games.

As the company secured more contracts it set up factories in China and Hong Kong, with injection and warehousing setups that tallies with production of a brand like Subbuteo. In 2013 it added spray painting and plastic modelling to its list of facilities, meaning it has everything needed to produce Subbuteo pieces cheaply.

The company site boasts of thousands of feet of office space and a head office employing hundreds of people. But the company itself is an OEM manufacturer – meaning it simply produces parts for brands.

If that is the case, who is doing the product planning, marketing and general management of the brand? And why would a Hong Kong-based manufacturer have any interest in Subbuteo?

Michael Kohner is a toy industry legend. His great grandfather founded a wooden bead business in the town of Tachau on the Czech/German border in the 1870s.

The company was passed down between generations before Michael’s father Paul fled the Nazi’s and, along with his brother Frank, set up Kohner Bros in New York. Michael joined the business in 1966.

The company was a huge success, particularly with the Trouble Pop-o-Matic game. And it was Michael’s work on this that led to his future career path.

In an interview with anbmedia he reveals how he stuck with the brand as it was acquired by General Foods and his realisation that brands needed to be global.

He said: “What changed my future long before I realized it was that we did very little internationally. We had a license here and there in Europe with Pop-O-Matic Trouble and I developed a close relationship with the help of the Irwin family in Canada who acquired our Busy line licensee.

“There was a world out there and I thought “global” for our licensing of the Kohner brand. It was amazing how it brought a lot of royalty money to the bottom line just wearing one of my many hats. Every company today must think global, if possible. Now of course my total focus is on international licensing and marketing of games.”

It is clear that a successful game based on the world’s most beloved sport would appeal to such a toy marketer.

Kohner is still in the toy industry today and over the years he has forged a relationship with a manufacturer in Hong Kong – Longshore.

Kohner and Longshore’s collaboration on another brand that saw popularity in the 1990s but since faded that could give the biggest clue about the future of Subbuteo in the UK and beyond.

According to a Wall Street Journal article, it was Longshore boss Michael Or’s son who was the catalyst for Kohner’s alignment with the Longshore brand.

It says: “In 2005, Kohner reached another turning point in his career. Michael Or tells it this way: “A short time after my son, Wai Or, came into the business in 2005, he asked Michael Kohner what he thought of an old Milton Bradley game called “Loopin’ Louie.”

Loopin’ Louie was a toddler’s game featuring a toy plane that flew in a circle and knocked tokens off. The four-player game had enjoyed popularity in the 1990s but was now sold in very few places.

Or said: “It was a great game but rather large. Michael came up with a new concept and told Wai, if Longshore could manufacture this game for a certain cost, including the inventor’s royalty, and if Longshore would invest in molds once we had a distributor, he could place it.

“So instead of Michael Kohner Corporation acquiring the rights to license the game from the inventor (a Japanese company called Sente Creations), he arranged to have the rights for the IP and manufacturing rights to be granted to Longshore. Longshore now was guaranteed the project for our factories and Michael Kohner handled our Marketing and Sales.”

It was exactly this situation that could explain what has happened with Subbuteo. Would a similar deal have made sense to Hasbro when looking for the next custodian of the Subbuteo brand?

It now has University Games advising and distributing new sets, while a teaser says France and Belgium sets could be on their way. Longshore is applying the Loopin’ Louie principles to Subbuteo by working with dedicated marketers to get the brand out there.

What happened to Loopin’ Louie?

Remarkably, bringing back Loopin’ Louie was an unprecedented success because of one strange stroke of luck.

The game became a cult hit drinking game, using the toddler’s toy aeroplane to inspire drunken nights across the country. Its popularity was so big Longshore sold over one million copies – meaning one in 80 German owned the new box set.

There was also a burgeoning makers community, with people selling modifications to the popular game and creating student tournaments and rules.

It could be argued the parallels with the wonderful world of Subbuteo stadium builders, self-painters and clubs are easy to see.

According to the Wall Street Journal, the game hit four times the level of sales Longshore would have called a success, and it prompted a revitalisation of the brand in the US and other countries based on its German success.

The success in a single country prompted a massive global marketing push with version in Italy, Netherlands and the US.

“To be honest with you, we got lucky,” said Wai Or, Longshore’s chief executive, who says that he, too, now uses it as a drinking game.

A stroke of luck. A market they did not expect to exist. And a brand brought back from the dead. It lay down a roadmap for the company to relight fires under other brands that lay dormant.

Could it be that a new England set, timed originally for a major European football tournament, was planned to be a catalyst for a huge marketing push for Subbuteo?

But back to Loopin’ Louie.

Well, in came Hasbro to reacquire the rights of the brand. Hasbro had obviously seen what Longshore and Kohner had done for the brand and took back control of it.

So there we are. Full circle. Hasbro saw what Kohner and Longshore had done for Loopin’ Louie, saw the manufacturing ability of Longshore and clearly decided on a new direction for Subbuteo, a brand it had neglected for years.

Hasbro have a company on hand that has previously taken a license, turned it into a global hit and then handed it back to them.

A brand Hasbro had success with in the 1990s was brought back to life and they quickly reacquired the rights. Suddenly it makes sense why they passed Subbuteo to Longshore.

It is a last effort to save Subbuteo based on a road to success that has worked before. Maybe it’s a Hail Mary pass for a brand that looks to be ‘all over’ as our anonymous informant suggested.

Subbuteo.Online has no evidence Kohner is involved in the Subbuteo license with Longshore, but we do know Longshore has already reached out to SubbuteoWorld in the UK to discuss a new website, branding and future products.

We do know it has a history of pulling brands back from the brink and we know the company has the manufacturing capability to produce new Subbuteo products.

We also know they have worked with and sold successful, revitalised brands, back to Hasbro in the past.

The marketing is key, of course. Longshore can’t rely on a drinking game-style miracle on Subbuteo. But Subbuteo already has the brand in place, the community is already built and knows exactly what it wants from Subbuteo.

We don’t know what’s next for Longshore and Subbuteo. The new sets are soon to be released but it will be the next set – the first completely designed and manufactured by Longshore that will determine if Subbuteo is to survive as a modern game.

But unlike before, at least we know who is behind the brand and why Hasbro believes it can be a success. And if it is a success, we may see a more hands-on Hasbro in future.

Some may think it’s all over. But the future may be brighter than we thought.