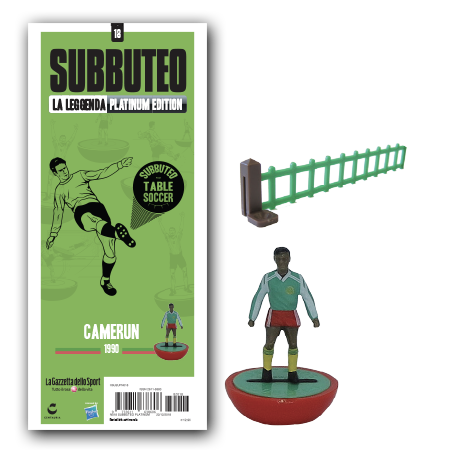 The first pictures of the Cameroon national football side for the 1990 World Cup in Subbuteo have been released.

The African side, featuring 38-year-old striker Roger Milla, has been recreated in the older ‘heavyweight’ Subbuteo style for the first time as part of a new official set of teams by Italian company Centauria.

Cameroon were the popular overachievers from the World Cup in Italy, winning their opening game against World Champions Argentina 1-0 and reaching the quarter finals before they were eliminated by England in a tight game.

The kit also caught the eye, with a bright green shirt with white hoops on the sleeve, red shorts and yellow shorts one of the all-time World Cup iconic kits.

The new set will be released on 22 December in Italy only, where it will be sold in newsagents alongside a magazine with history about the team, its formations and the World Cup tournament. Priced at 12,49 Euros, the team is part of a series of 80 sides set to be released between August this year and next year.

A team a week will be launched in the collection alongside a selection of accessories ranging from a pitch and goals to officials and fencing surrounds.

Centauria has an official license to produce the classic teams and has based the design on the old heavyweight Subbuteo figures. It has been called the La Leggenda Platinum Edition series.

The La Leggenda name is not a new one. Previous sets of teams have been based on the more modern lightweight Subbuteo and celebrate the world’s best club and international sides. Cameroon 1990 have previously been created in the La Leggenda lightweight range in the 2000s but this is the first time the team has had a heavyweight makeover.

The La Leggenda Platinum Edition range will feature 80 classic teams including the likes of Brazil 1994, Holland 1974, Italy 2006 and England 1966. However, more modern teams are also included including Iceland 2016, Panama 2018 and England’s World Cup semi-finalists of 2018.

Nigeria’s famous Nike kit of the 2018 World Cup has also been created and went on sale this week in Italy as part of the range.