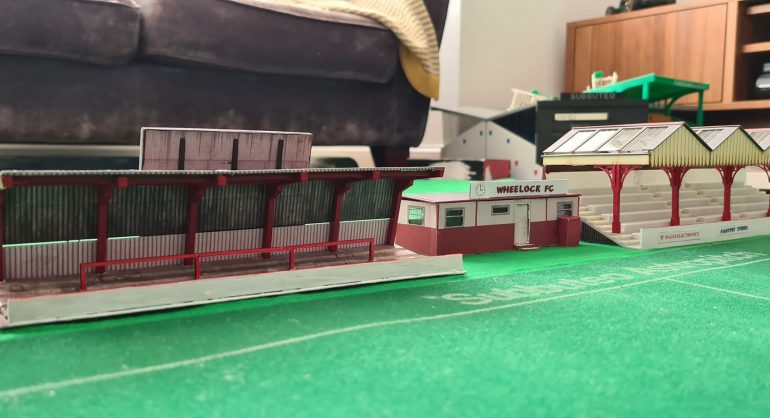 How to build these detailed non league Subbuteo terraces

Here at Subbuteo.Online I’ve made no secret of my love of smaller, non-league style grounds.

The glamorous world of Subbuteo accessories meant the makers of the game rightly focused on large grandstands and impressive two-tier stadiums but that means the purity of the non league game can often be forgotten by stadium builders.

That is not the case for Dan Martin, who has kindly shared two beautiful non league-style terraces for his stadium.

They include a small standing area with crash barriers and a classic corrugated roof, and a beautiful stand with an ornate canopy for fans who want to pay a little more to watch the flicking action.

Dan has also shared some tips on how to make the stands.

“The seated stand was made by carefully cutting down a larger terracing section with a hack saw (slow and steady) and then sanding down any rough bits. I used the rear wall from the redundant terrace to raise the rear wall of the stand.

“The roof was made by adapting a Metcalfe Station platform canopy. The rear walls were clad using a corrugated wall pack from modelrailwayscenery.com I think it gives the overall feel of a stand that has seen better days. The smaller standing covered terrace was made by using some of the components of another modelrailwayscenery.com set, of an open modern barn (basically its cut in half).

“With plenty of patience, glue and a bit of paint it again has the feel and look I was aiming for. The feedback I’ve had from the Subbuteo Stadium Community has been amazing, and has already got my cogs turning for the next project.”

It’s not the first time railway accessories have been used to make realistic Subbuteo stadium parts. Earlier this year we reported on a nice terrace turnstile trick made from a low-cost railway ticket barrier. You can read that here.

These stands show the rustic look really works for a Subbuteo stadium, especially when using older accessories such as crowd figures and ballboys.

Thanks to Dan for sharing the tips – and we cannot wait for the next project!