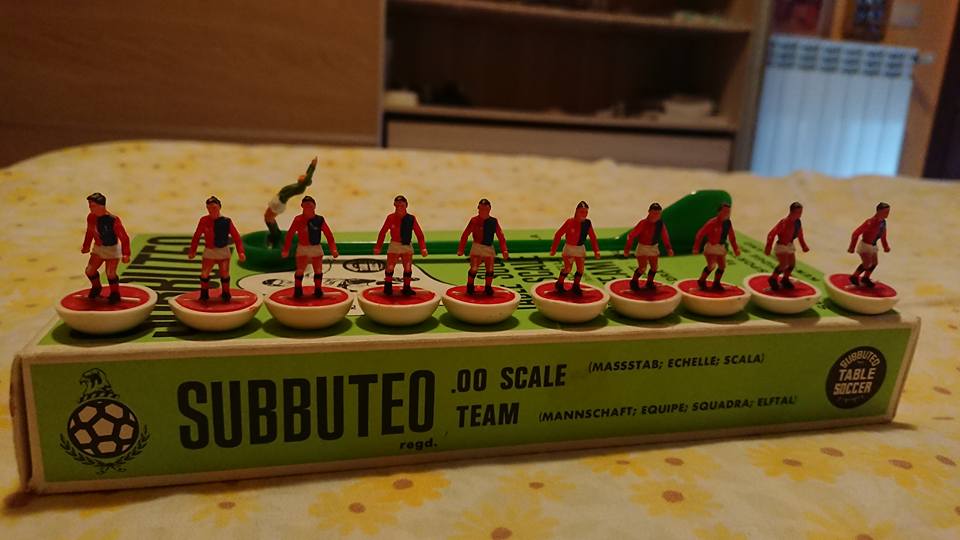 Newcomers to the world of Subbuteo often ask the same thing. Probably the most common question is ‘which is the rarest Subbuteo team’?

It is an impossible question to answer – after all nobody is entirely sure if the mythical NASL teams were ever produced as a prototype.

Then there are rare obscure European teams (hello Lyn Oslo!), teams with rare bases colours and special teams such as FC Subbuteo or The Farm’s own team.

However, one Subbuteo fan and an Italian journalist have teamed up to find out the amazing story of Sambenedettese – a team so rare only 50 were ever made and when one was listed on eBay it fetched more than £800.

Sambenedettese are a small club in Italy’s third tier, Serie C, with a striking red and blue halved kit matched with white shorts.

The kit is a popular one in Italy and Subbuteo reference 72 was used for Cagliari, whose shock 1970 Scudetto title probably helped to secure the reference number in Subbuteo catalogues. It also doubled as that of Genoa and Sambenedettese.

Subbuteo did create several boxes for Italian and other European teams before they were given a reference number. That means for a short time only the likes of Napoli, Roma and Sampdoria were sold with names on the boxes instead of the traditional numbers before they were eventually added to the catalogues.

But why did Sambenedettese have such a special Subbuteo honour where others did not? And why is the team so incredibly rare?

Fabrizio Taffoni told us what he found out.

He says: ” I investigated, being from Sambenedettese, on the origins of the Subbuteo team and I was able to reconstruct the whole story thanks to my friend as well as a reputed journalist Remo Croci.”

In the 1973-1974 football season Sambenedettese was promoted to Serie B in Italy’s second tier.

Fabrizio says: “Among the club’s vice-presidents was Giuseppe Valeri, one of the TVP owners. TVP was one of the first local Italian TVs that was mainly set up to broadcast Sambenedettese games.”

“Giuseppe Valeri went to Florence to order various Sambenedettese merchandise including paperweight badges and pins. There he probably and probably ordered a Subbuteo team from Parodi, who was licensed to produce them at the time in Italy.

“The teams seem to have all been given away to politicians and prominent representatives of city life as well as to personalities.”

Journalist Remo Croci was a young commentator at the time and received some miniatures. However, there was a small problem with the team. Without a reference number Parodi added the Sambenedettese name to the box – but spelt it wrong.

Fabrizio says: “I have two copies traced between grandchildren and children of the executives of the time on the 50 copies ordered.

“If you have one you don’t sell it is SAMBENEDETTESE.”

And in a lovely twist to the story, Remo Croci showed the team to the Sambenedettese team of that era. The clip is in Italian, but is a great look at how Subbuteo nostalgia can be found across the world.