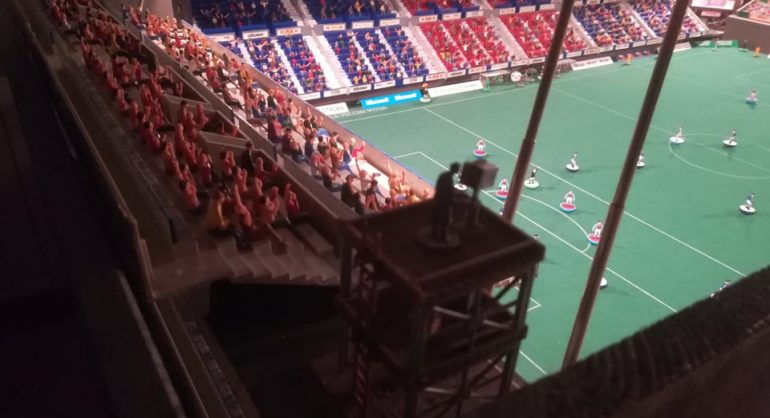 The Subbuteo stadium that has been standing for 35 years

In 1985 Riccardo Bertone bought a Subbuteo grandstand and a corner terrace.

A year a stadium started to take shape.

It is probably a familiar story with people who return to the game and suddenly find themselves ordering boxes of accessories and building a Subbuteo stadium in any spare space they can find.

But a stadium started in 1985 has to be one of the oldest standing Subbuteo stadiums in the world – and it’s not finished yet.

Italian collector Riccardo says: “This is the Arena Stadium Sarzana. There are about 1.000 spectators. and a mix of old Subbuteo grandstands with ultimate Zuego accessories.”

He also added some hand-built wooden structures that he designed and built himself, while four floodlights were bought from IKEA.

The stadium is a labour of love, with a unique two-tier end stand and hand-painted fans lovingly painted by Riccardo himself. Although they will soon be joined by 50 yellow-clad stewards painted by Subbuteo fan painter extraordinaire Steven Jeffrey.

He says the stadium is nearing completion, calling it ‘the ultimate version’ after an incredible 35 years of tweaking.

Take a look at the detail and love that has gone in to the wonderful stadium.