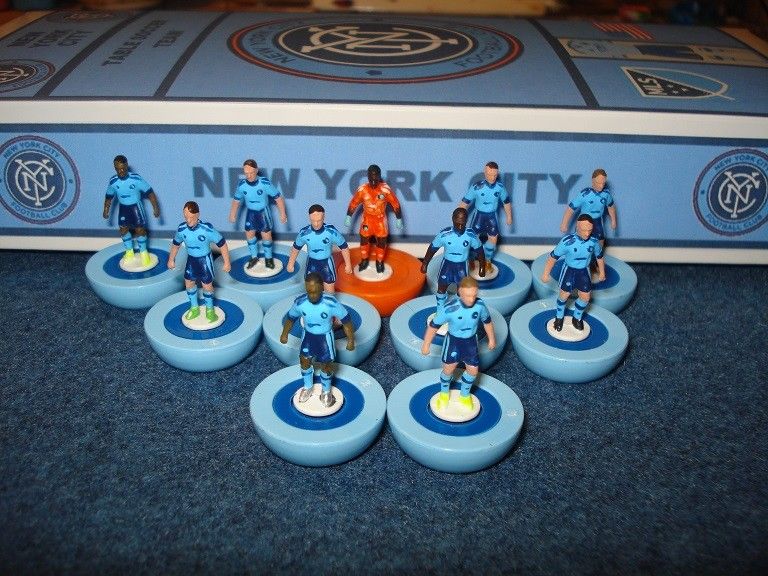 Manchester City are in New York to compete in the ludicrous International Champions Cup tournament, a leg-wearying set of friendlies with some of the ultra-rich teams in world football.

City, whose ownership group also owns New York City, are using the US club’s facilities at Orangeburg as part of their pre-season preparation.

Pep Guardiola has been busy off the pitch after he was supposed to throw the first pitch at the New York Yankees game until rain halted play, while talented youngsters Jack Harrison and Phil Foden have been impressing on the training pitch according to local media.

However, one minor aspect of the money-spinning tour has caught my eye – and that of Manchester’s very own Manchester Evening News.

In pride of place at New York City’s training complex is a specially-imported Subbuteo table used by the club to talk tactics.

It’s nice to think that single imported set has had Patrick Viera and Pep Guardiola ruminating over tactics. There are not many Subbuteo sets with such an illustrious set of players.

It should not come as a surprise to see the set. After all, it’s only weeks since Gareth Southgate’s England huddled over a Subbuteo pitch to discuss tactics during their thrilling World Cup run.

We also spotted Worcestershire FA training new up-and-coming coaches using a Subbuteo set this week – although some of the trainees did not look too impressed.

The ability to showcase tactics and movements in 3d, with multiple people working through scenarios on a pitch is becoming an important part of modern football. The game that was a 1970s (and earlier) bedroom classic could have died out with the introduction of computer games and at times it has felt like that was the case.

However, its use as a tactical aid has rejuvinated the game and is launching it back into the mainstream.

Subbuteo is slowly carving its own important niche in the modern world – and that can only be a good thing for fans and collectors.

I wonder now if makers of the game are considering special tactical editions for clubs or some kind of trade package for coaches who want to use it for their training sessions. Could it be a revenue stream that keeps the game going across the world?