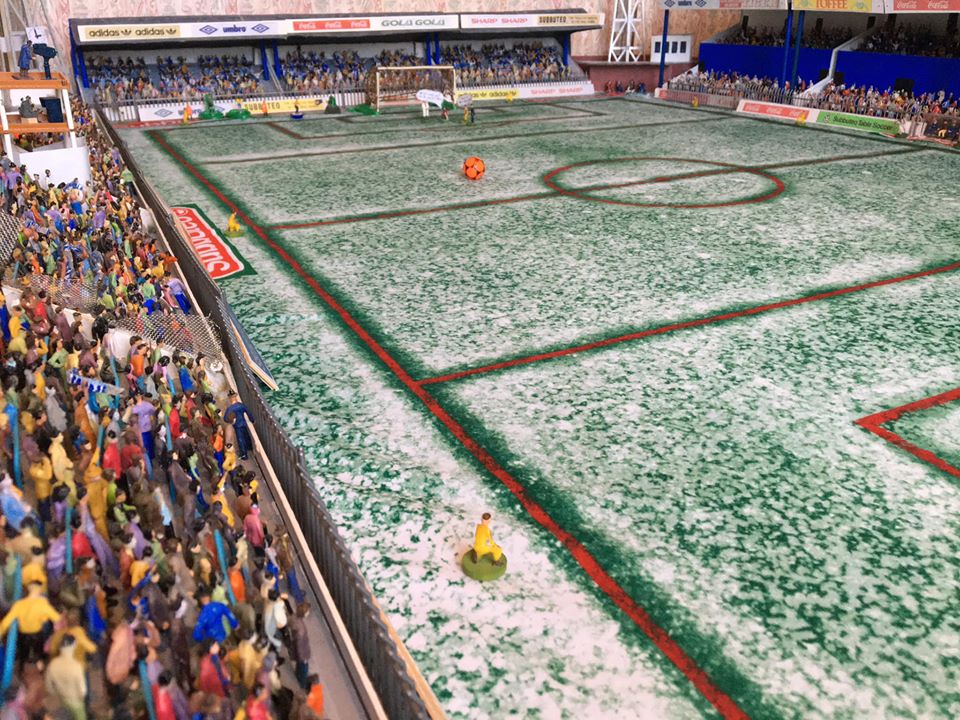 The Subbuteo winter pitch looks amazing in a stadium build

The Subbuteo winter pitch has been the must-have new accessory for a couple of months now and shows no sign of losing popularity.

The official pitch could be the last accessory ever made by current licensee Eleven Force and they have gone out with a bang with the snow-style pitch complete with bright red pitch markings.

A fan of the pitch has revealed what it looks like inside a Subbuteo stadium and the results are incredible.

Stephen Gladwell kindly shared pictures of his stadium complete with winter pitch and it adds a touch of winter atmosphere to the whole design. With stands full of fans it really does look the part in a stadium build project.

You may notice the pitches are missing one important feature – a second penalty spot. All of the pitches seem to be missing a penalty spot at one end but you can always assume it is simply covered in snow.

Fans of the pitch have praised it for the high quality of cloth, describing it as playing quite quickly compared to standard cloth pitches. However, the dazzling snow effect can cause a bit of snow blindness with white balls so it is time to break out the orange Adidas Tango.

If you are after a winter pitch they are on sale at We Are Games in Spain for around £30 including delivery to the UK.

Thanks to Stephen for sharing pictures of the pitch in action. It looks like a perfect winter stadium accessory and if it is a final accessory from Eleven Force before Subbuteo production moves to Hong Kong it has saved the best until last.