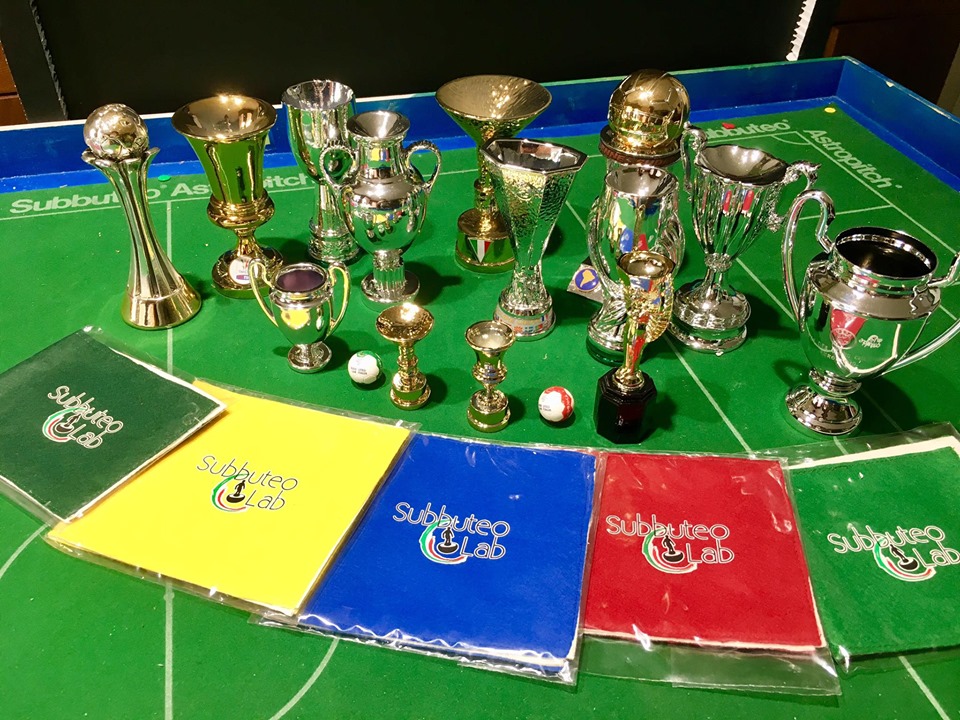 Subbuteo is coming back with a 2020 relaunch, TV adverts and a new England box set.

You can read more about the 2020 Subbuteo relaunch here.

While the launch looks like it will be a new modern box set in keeping with previous relaunches it has allowed us to dream of a revival for the game that still has a huge following in the UK and abroad.

To celebrate the relaunch of Subbuteo and in anticipation of the first look at the new box set next week we asked Subbuteo fans to tell us what they would like to see in a relaunched Subbuteo in a dream world.

Probably one of the biggest criticisms of new Subbuteo is that is feels a bit cheap. The lovely presentation boxes of the 1960s and 1970s are now soul-less boxes with teams chucked into plastic bags.

@Greenfield19R rightly wants the box inlays back, saying: “Some inlay packaging in the box sets to hold everything in place instead of it all just chucked in the box loose.”

We would also love to see a return to the classic Subbuteo green boxes and a more grown-up design. That would encourage people to display their Subbuteo sets as well as play with them.

Subbuteo’s oversized trophies are a huge draw for collectors. Who doesn’t like a miniature version of the likes of the FA Cup, the European Champions League and the one everybody wants, the rare Subbuteo League Cup?

Twitter user @IvoMirko suggested trophy replicas should be part of the new game and it could mean first appearances for the Europa League and World Club Cup Championship among others.

You can get miniature replicas of these via Italian Subbuteo shop Subbuteo Lab and it is unlikely Subbuteo will obtain the licenses for new trophies.

@LouBiffo was the first to respond to our question. He says a proper women’s team set is long overdue.

Subbuteo did create a women’s team set for the 2018 FA Cup Final but it was never sold.

He says: ” I would just love to be able to get my daughter a US team, or a U-Paint so she can create her own side.”

Advances in LEDs should mean any floodlights would actually light a Subbuteo pitch.

@MilesGrady says: ” The floodlights were my favourite bit but not many grounds still have them?”

He’s right., but at least we still have Grimsby’s magnificent floodlights reminding us of better days

@LordyLadReight agrees, saying: “Old style three leg floodlights with blue ever ready battery in base – either the 126 or AD28

@LordyLadReight wants keepers on metal rods. He says: “They could come out further to make the goals smaller back in the day and would meet the requirement for the modern sweeper ‘keeper.”

Many lapsed players of the game will not mourn the end of the creased pitch and a non-iron surface is top of the wishlist for @sir_brooks81.
He says he wants a “heavier pitch that doesn’t crease out the box. Always a pain as a kid trying to get mum to iron it “

@clashboy23 agrees: “On a side note if they could develop a rollout, ready to use pitch it might take off again.”

It may be worth looking at the modern Astro pitches for more premium new sets.

The iconic Subbuteo poster is probably one of the most popular Subbuteo accessories of all time.

@CaptainScho is keen to see the return of the poster with the white background and team kits. We’d love to see it too as it would mean hundreds of new teams were being released.

@clashboy23, who has a spectacular Subbuteo stadium setup, wants “Variations on supporters poses. More than the 5 available would be nice.”

The famous Subbuteo fans were only sold for a short period and it is unlikely stadiums accessories are making a comeback with the new box sets unfortunately.

@Paul0995378827 is fed up of modern Subbuteo players falling out of their bases. He says: “They need to be good quality like the old school LW players instead of the more recent bendy versions that fall out of the bases.”

This is probably unlikely but we are getting more detailed players and different coloured boots this time around.

Collectors love the old Subbuteo reference numbers and it would add a new dimension to the often dull new sets.

Fans have lined up to tell us about classic teams they would like to see return.

@thealmightyquin says: “My number 1 wish would be to re-instate the original reference no.19 – Bradford in Red/Amber and Black hoops with white shorts and put the changed no. 19 Barcelona with a new number or make it 19B.”

@iManc_added: “Re-issue a no.5 with sky blue socks with maroon tops!”