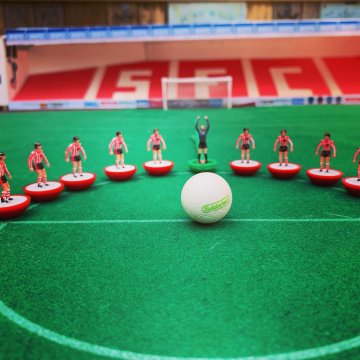 A Southampton fan has recreated The Dell in Subbuteo

The rise of modern stadiums mean many fans enjoy watching football in ultra-comfortable arenas with all mod cons.

But for fans of clubs who have moved there is always a first love – the older stadium you first watched your team perform.

For one Southampton fan The Dell is the peak of perfect football stadiums. The stands were close to the pitch and the famous narrow goal nets were instantly recognisable for football fans across the land.

In honour of The Dell one Subbuteo fan has painstakingly recreated the place where Matt Le Tissier worked his magic and the result is a beautiful recreation of one of football’s lost grounds.

Richard Anderson spoke to us about his Subbuteo version of The Dell.

“I started it a few years back because I wanted to recreate The Dell, as I had so many childhood and teenage memories from there. I thought the best scale to make it to would be Subbuteo as then I could have a game or two back at the Dell!”

The stadium is built using card, plastic and balsa wood. Richard says: “It took a load or research to get the measurements for everything and then convert it into Subbuteo scale, was a long process, but I bloody loved it, it felt like being back at the Dell again! If only I’d put that much effort into school projects!”

Richard, like many modern Subbuteo players and collectors, remembers the game from his youth and has been brought back to the joys of the flicking to kick in recent years.

He says: “As a kid I used to play Subbuteo a fair bit, never anything too serious, but had a lot of different teams and all the trophies, we used to use a 50p coin for the Charity Shield.

“I haven’t played properly for years, but I am intenting to now with some mates and a few beers. I don’t have all the teams I used to, but over the last couple of years I’ve been trawling eBay got old Saints teams and have a few now.”

To get the detail correct Richard has also got an army of Saints fans helping him to bring back the true feel of The Dell.

He says: “Lots of mates have been following the development and helping with hints and tips about the quirky bits I might have forgotten about the Dell, so there was a lot of attention to detail. The one thing that I might try to develop at some point is to get the floodlights to work, as I think that would really finish it off. “

Thanks to Richard for sharing his take on The Dell. It follows similarly beautiful replicas of stadiums such as Goodison Park and Villa Park.