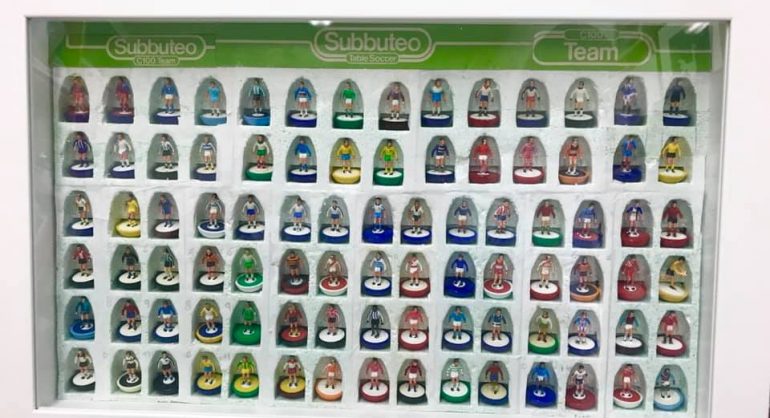 From tiny shelves with over 2,000 players to stunning LED-lit displays, we thought we’d seen everything.

That is until Guy Palmer from Gibraltar kindly shared this stunning Subbuteo cabinet using a clever way to showcase some beautiful Subbuteo single players.

Guy has been active in many of the Subbuteo Facebook groups in recent months under the psudonym Subbuteo Tottenhamfan and many will have been in awe at his vast collection of rare teams.

The cabinet display is superb. He has used Subbuteo inserts to create a thing of genuine beauty and he has shared his tips on creating the display.

He says: “The display is like a picture frame but it is deep , like a cabinet. I got inner trays from the 63000 and c100 boxes , cut the trims off until I had rectangular eight-men foam trays. I stuck them with silicone and did some cuttings from old boxes for the top Subbuteo trim.”

All of that was placed into a cabinet-style frame and the end result is a spectacular display of single Subbuteo players.

While the display itself is superb, the collection of players is also worthy of note. Alongside Subbuteo classics such as West Germany and Sampdoria there are also incredibly rare players such as Lyn, Ado Den Haag and Bishop Auckland.

We’ll be catching up with Guy again about the amazing collection you can spot in the background but for now just enjoy one of the cleverest and most innovative Subbuteo displays we’ve ever seen.