Last year we revealed England’s 2018 World Cup heroes would be immortalised in their very own Subbuteo set and now we have a first glimpse of how it will look.

There may be no Gareth Southgate included in the set but England’s players have been recreated by Italian company Centauria and will be released early in March 2019 as part of the Subbuteo La Leggenda Platinum Edition range.

The set, which features players in the England home kit worn in the 2018 World Cup in Russia, features some intricate detail around the collar and a small but precise Three Lions England badge and the star that represents the World Cup title in 1966.

The bases ditch the 1990s red and are now white and blue, and the figures themselves are more closely related to the earlier heavyweight Subbuteo era of the 60s and 70s.

The team is part of a new series of 80 international football teams from throughout history and it is being sold at newstands in Italy. Each team comes with an accessory and a booklet outlining the tactics and history of the team. Unfortunately for England fans it will not actually be on sale in the country. Instead sets will only be available from resellers on eBay.

England’s 2018 team was included after they reached the World Cup semi final before losing to Croatia – another team who should be included later in the range.

However, perhaps collectors are a little upset that England’s much more attractive training shirt featuring a bold red and blue pattern across the chest and shoulders was not used as the national kit. It would have made it a more unique and collectable team and mirrored the beautiful 1982 England Subbuteo set.

Centauria has also revealed the Costa Rica side that helped to knock England out of World Cup 2014. The 27th team in the range includes the traditional red shirt with a nice blue stripe across the front. 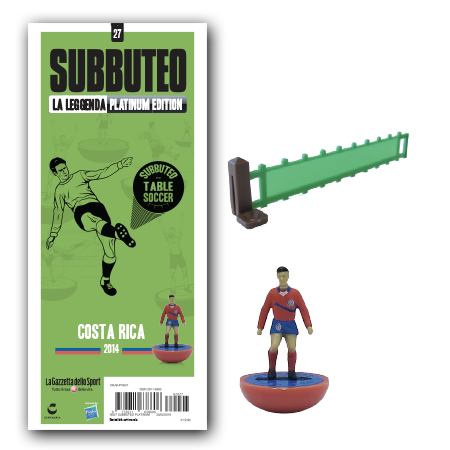