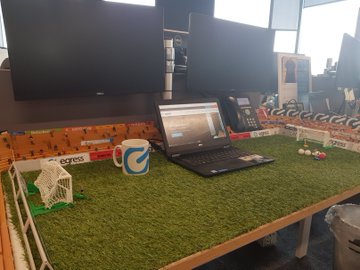 Subbuteo is not just a brilliant table-top football game that has lasted generations – it is also a perfect decoration for your bookshelves or desk.

Subbuteo.Online will often showcase the best Subbuteo displays from LED-lit frames to individual player collections. Then there are the beautiful Subbuteo rooms and sheds across the world displaying the very best of flicking action.

When we asked for some pictures of how people have decorated their computers and workstations with the game we expected a few players and maybe even a mug or two.

We did not expect what is probably the greatest work desk we have ever seen.

Chris sent us a video that has to be seen to be believed. Surrounding his monitor and work phone is not only a Subbuteo pitch complete with goals but also Subbuteo stands on three sides.

It even includes fans watching the action and we had to ask him the story behind such an incredible work area.

He says: ” The idea came from my last company. Working in a team of women who have lots of pictures of their friends and family on their desks I was told my desk was very bare and that I should do something with it. I told them all I care about is football and in turn decided to do this to prove a point 🙂 It took a month or two of sourcing on ebay for various bits and pieces. The desk doesn’t fit a standard Subbuteo pitch so I went with astro turf instead. If they ever turned the lights out in the office I would have got some flood lights too”

The big question is what his employer thinks about the Subbuteo desk.

He says: “My employer actually loves my desk. We operate a clean desk policy being a security company but for some reason they feel it really embraces our fun culture. In fact when the CEO brought his kids in to the office they ran over to my desk and said ‘Dad this must be your desk.. It is amazing’

“I feel sorry for the girl who sits next to me but I have already told her as soon as she is out of the office I am painting her desk grey with white lines and turning it in to a car park.”

Fulham fan Chris was a Subbuteo fan as a child and always wanted a full stadium. While he doesn’t collect anything outside of the desk he does have his eye on one addition.

He says: ” I’m always looking to add more… especially fans as being a Fulham fan I get a lot of comments from colleagues around the attendance being the same as that of Craven Cottage. The dream would also be able to find a replica size of the cottage at Craven cottage to put in a corner.”