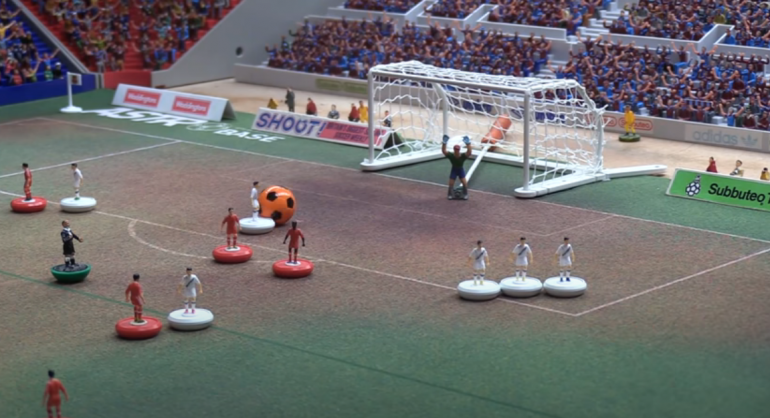 Subbuteo muddy pitches are weeks away from going on sale

The Subbuteo muddy pitch is set to be launched in the UK – and a new training pitch will also be available.

Keith Littler, one of the team behind the Table Football Monthly Youtube channel, has revealed the muddy pitch is nearly ready for Subbuteo fans to get their hands on them.

He says: “Muddy Pitch Update: The pitches will hopefully be here inside the next 10 days and we’ll get straight into cutting them. Hopefully deliveries will be ready to start going out in 3 weeks.”

The Subbuteo muddy pitch has caught the eye of fans of the table top game in recent months after Keith revealed he was designing them himself after being inspired by the official Subbuteo winter pitch.

The idea has proved to be a success with buyers lining up to order it, inspired by the nostalgic 1970s feel of the design.

Keith talked about the inspiration behind the pitches for Subbuteo.Online here.

And the pitch designer has added an exciting bit of news to the announcement. A training pitch is on the way and the materials have already been ordered.

He says: “Training pitches shouldn’t be far behind. PVC backed Astroturf should be arriving from Germany before the month is out and then will go to print.

“Sorry things are moving at a snails pace but the world is a mildly different place these days and nothing is quite as straightforward as it was pre-COVID.”