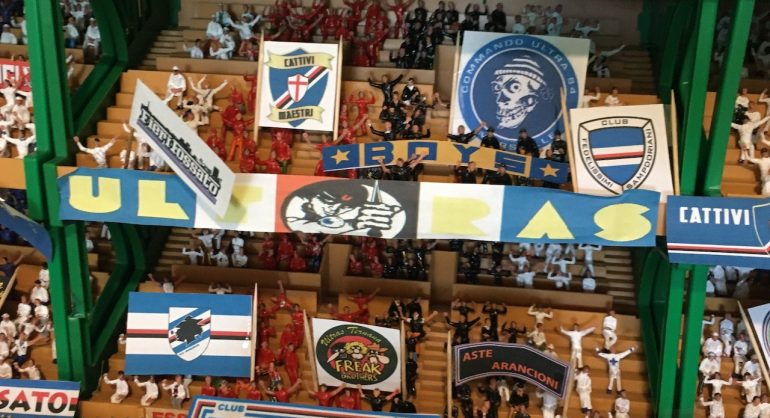 Lockdown has provided a chance for Subbuteo fans to kickstart that project they have been putting off.

For some of us it’s painting some teams, for others it’s completing solo tournaments and for one Italian fan it was a perfect opportunity for a new stadium project.

Sampdoria fan Nicola Strumia decided to use classic Subbuteo grandstands to create a beautiful display for his Subbuteo pitch and the more you look at it, the more you will spot some lovely details.

He says the project started in February when Italy was locked down amid the coronavirus pandemic. He wanted to pass on the Subbuteo bug to his son after enjoying the game in the 1970s and 1980s.

He says: “Months of work, purchases, materials, brushes, colors, cuts, more than 1200 supporters. It is a small tribute to #Sampdoria and above all to the South End of Genova, to the groups and to the people who populate it. My only hope is to return to populate those grandstands soon.”

The stand itself is a nod to his favourite club – and one of the most iconic Subbuteo teams of all time.

He adds: “The design is divided into two parts: a first in which only the fans are seen with the shirts of the colors of Sampdoria (in memory of an old cup final against Lazio), and a second with all the flags and banners of the ultras, including those of twinned groups: Marsiglia, Parma, Bari, St. Pauli, Ternana.”

He has also added a nice little Easter Egg in honour of Massimo Ferrero, the president of the club. He is particularly unpopular with supporters and they are hoping he is set to sell the club. Here he is in the form of Ghostbusters in a nicely designed banner.

Thanks to Nicola for sharing the stadium and the story behind it.