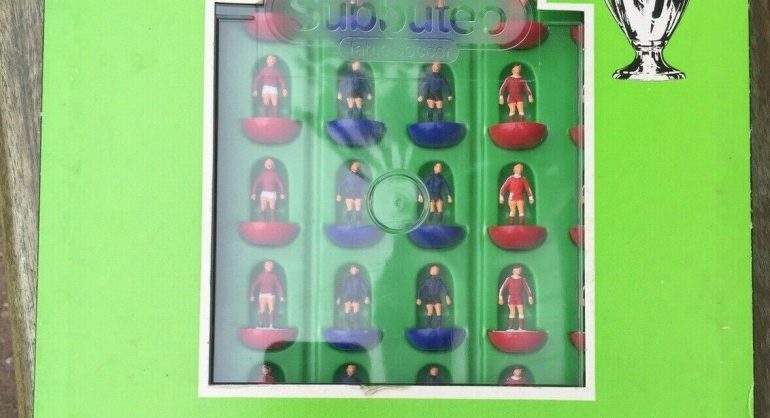 It is the biggest club competition in world football. The trophy every club wants to win.

For many it is an obsession. Paris St Germain and Manchester City have spent billions chasing the Champions League dream, while the likes of Nottingham Forest and Aston Villa have rightly mythologised their heroic wins.

So it seems strange that the world’s most popular table top football game has almost ignored the competition for over seven decades.

For decades the tournament was essentially ignored by the makers of Subbuteo, who produced a series of trophy sets for the League Cup, FA Cup and World Cup.

However, it was only when Liverpool and then Nottingham Forest began to dominate in the 1970s that Subbuteo realised there was a way to make money from this European tournament.

It seems the owners of the brand suddenly realised the potential of the tournament – and the teams it could sell on the back of it and quickly put their head together to find a solution.

The C175 ‘Three European Cup Winners’ set was born. It seems like a rush job, with a nice display box and three different teams. These are usually Bayern Munich, Inter Milan and Nottingham Forest, who all won the trophy during the 1970s.

The set had a note on the back with a list of finals and winners, along with a bullet point next to the three teams included in the box.

Amazingly, the special edition set did not have a trophy in it. Subbuteo had not got round to creating a trophy for the tournament.

It is safe to suggest it did not sell in high numbers and as a result the three team effort is worth a lot of money now. Subbuteo World has it listed for £200 while a current eBay listing is optimistically asking for £250 for the set

Hindsight is a wonderful thing but it seems like a huge missed opportunity for Subbuteo. A pack released each year with the two finalists and a trophy could have been a beautiful collector’s item and would be in high demand..

Alternatively, it might have been a nice way to sell some extra teams if they were sold with tiny European Cup stars on their badge. A special edition Nottingham Forest with two stars would be a nice addition to the range.

Subbuteo did similar at a later date, adding the Scudetto badge to special edition Italian Serie A winners. These fetch more on the market and provide another interesting niche group of teams for collectors to target.

And, licensing issues aside, it’s probably not too late for Subbuteo. Create a beautiful box for last year’s Liverpool team complete with a European Cup trophy and make it limited edition. It would not be left rotting on shelves.

When the brand did finally bite the bullet and create a European Cup trophy it was a case of right idea at the wrong time. Buoyed by Aston Villa’s triumph in 1973, Subbuteo launched the European Cup in 1973.

It was huge compared to the other trophies and rather bland, with none of the detail of the FA Cup or League Cup. It didn’t even come with a plinth.

However, Subbuteo was sure it would be a best seller – until the unthinkable happened and English clubs were banned from Europe for five years after the Heysel stadium disaster.

It may have been this incident and a perceived fall in interest in the trophy that meant Subbuteo never tweaked the design. Instead the trophy limped on in catalogues through to the 1990s, where the final indignity of a blister pack design was sold.

It’s astonishing to think the surge in interest in the tournament in the 1990s did not result in box sets or special ‘winner’ editions of teams but for Subbuteo it seems the European Cup was a nice idea beset by appalling timing.

Subbuteo eventually did embrace the Champions League with a special box set in the 2000s with full licensing. However, the quality had dipped and the loose plastic pieces inside were no longer of sufficient quality or design to entice buyers.

By 2020 Subbuteo’s rocky relationship with Europe’s top club trophy seems to have come to an end. You can still buy a modern trophy complete with Adidas ball but it is unlikely the brand will release another licensed product in the near future.

Instead, you can buy a Subbuteo European Cup for around £10 on eBay. However Subbuteo World also stocks a beautifully-detailed non-Subbuteo metal replica will set you back £35. You can buy that here.