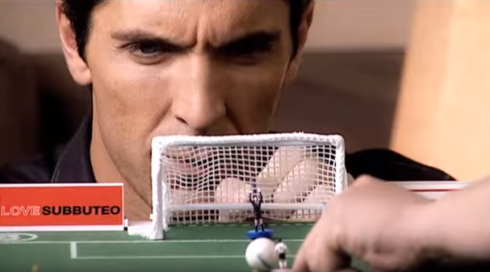 Gianluigi Buffon is one of the greatest goalkeepers of all time.

A World Cup winner, champions of Serie A and Ligue 1 a combined total of 10 times and an Italian national team hero, at the age of 41 he is coming to the end of his playing career.

What does a decorated footballer do once their career ends? Coaching? Scouting? Punditry? For Buffon, there is something much more important.

In a new interview set to be aired on Sky One in Italy Buffon has revealed his retirement plans involve football on a much smaller scale.

He says: “At the end of my career I will be able to spend more time on my Subbuteo collection”.

The answer will not be a surprise to many who know the goalkeeper. He has long been a fan of Subbuteo and has even appeared in a TV advert for the game, which enjoys immense popularity in Italy compared to its niche appeal in the UK.

Buffon has previously admitted liking German side Borussia Monchengladbach because he had a Subbuteo team in the club’s colours as a child. He was presented with a shirt for his most recent birthday as an homage to his love of Subbuteo.

He received his first set at the age of five from his Grandparents at Christmas and has passed the love of the game to his eldest son, according to an interview on the Subbuteo website.

At the time of the interview in 2013 he had over 500 teams in both heavyweight and newer lightweight styles.

The Paris St Germain stopper has previously revealed he would consider a career in football. He was quoted in 2018 as saying: “Honestly I have not decided yet, I would like to stay in the world of football where I believe that the experience of us players can be an added value for the growth and the development of the other players.”

However, it seems he will also be dedicating some time on expanding what we expect is a fairly massive Subbuteo collection.