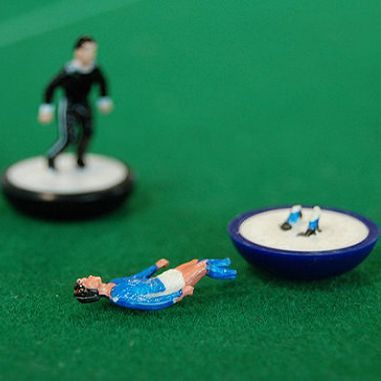 A major UK toy store has confirmed it has dropped Subbuteo from its shelves just months before Christmas.

In a blow to the table top football brand, Hamleys has confirmed it is no longer selling Subbuteo and the last few accessories are being listed on its website only.

When we asked the store about Subbuteo it said: “I regret to inform you we do not sell the Subbuteo game anymore. We do still have some Subbuteo accessories which can be found online but are no longer in any of our stores.”

Hamleys is one of the last few high street stores to stock Subbuteo in the UK and has prominent positions in London, Manchester and other cities. It also has concessions in House of Fraser in a handful of UK sites.

Subbuteo was launched in Hamleys six years ago by Paul Lamond Games to much fanfare. Kent Invicta’s Under 12’s England Squad were invited to try out the new game as part of the game’s relaunch but it seems interest from the two companies waned quickly.

Hamleys is currently pushing other modelling-related hobbies with a new display of racing game Scalextric in its Manchester store in the lead up to Christmas.

Subbuteo is now only sold via a small number of outlets including a retro game in John Lewis and online at UK licensee Paul Lamond Games as support from UK retailers dwindles to an all-time low. Amazon also stocks a small amount of Subbuteo made by Paul Lamond.

The lack of any new teams or box sets in the UK, coupled with poor design and a lack of marketing has pushed Subbuteo to the brink of extinction in the country despite thriving communities across the world.

In Italy a new part-work Subbuteo called the La Leggenda Platinum Edition was launched in the summer, while American importers Garage Soccer is rapidly growing the game in the US.

In Spain, We Are Games and Hasbro itself is proving to be popular with new sets based around the La Liga sides launched with full licensing.

Hasbro, the makers of Subbuteo, has hinted at new suppliers and distributors of the game and given the current news a new UK licensee would be the only real solution to kick starting a revival in the country.