The best teams in the Scottish Premiership ranked by Subbuteo kit

The Scottish Premiership is back and we couldn’t be more excited here on Subbuteo.Online.

There are a few reasons; many surviving examples of the UK’s best football stadiums stand North of the border. There’s also the Old Firm Derby, one of the great games in world football, and of course, the stunning kits.

While the top flight is missing Inverness Caledonian Thistle’s brilliant blue and red number and we can’t feature Partick Thistle’s bright shirts despite our love of Kingsley, there are plenty of beautiful kits to take a look at.

But what if the Scottish sides decided to forgo actually playing football altogether? The players and fans could have a nice warm lie in during those cold winter months and could spend even more time playing Subbuteo.

To decide the league, they should rank the teams based on the best Subbuteo kits in their team’s history.

Luckily, we’ve already done this for them. Read on. 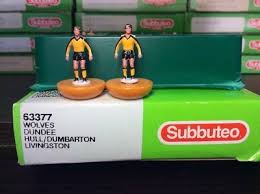 There’s nothing really wrong with the gold shirts of Livingston’s kit. However, the fact the club was formed under its current guise in 1995 limits the number of teams Subbuteo has produced.

As it goes, Wolves was simply expanded to include Livingston in 1990s sets and these are readily available at prices around the £10 mark. 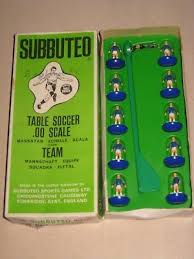 Poor St Johnstone. In the 1980s they were forced to share a blue shirt/white shorts combo with Chesterfield, Oldham Athletic and Viking of Norway.

It is hardly St Johnstone’s fault because it quite accurately reflects their home shirts but the Subbuteo set is a little underwhelming. It can be picked up for a low price and I suppose it is quite flexible in the number of teams you can use it for. 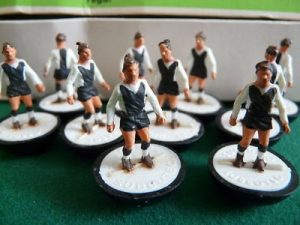 St Mirren have returned to the Scottish Premier League after promotion but they’re probably not the best represented Subbuteo team in the world.

The white strip of the 1980s version was used for St Mirren in 182 complete with single black stripe down the front. Sadly, it was then changed to Udinese in the early 1980s as St Mirren fell out of favour.

St Mirren returned to Subbuteo during the lightweight era, sharing a set with the mightly Juventus and Notts County. 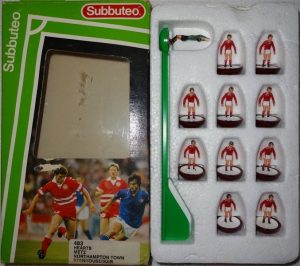 I have to be honest, I expected better from the claret-coloured Hearts of Tynecastle. The lightweight Hearts kit is a bit bland.

It does have the colour, which looks a bit red to me, but doesn’t really have much else. It doubles as Metz, Northampton and Stenhousemuir so at least you get plenty of teams for the £12 or so it costs to buy the set.

Move closer to the glory days of the late 1950s and you do get a good Hearts set, with a colour much closer to the team as it is now and a clean, simple kit with plenty of style. It’s nearly £100 on Subbuteo World though, so it’s not cheap. 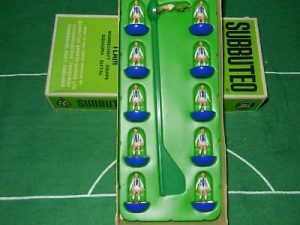 The reason why the 1980s Subbuteo Kilmarnock is so beloved is because it is a one-of-a-kind. The kit does not double up as any other team and is therefore a bit of a rarity.

The set comes some time after Kilmarnock’s 1965 title, when a 2-0 win on the last day of the season won the title on goal average.

The kit itself is beautiful. A white shirt with three blue lines down the middle is simple but effective – and can fetch £120 on Subbuteo World. 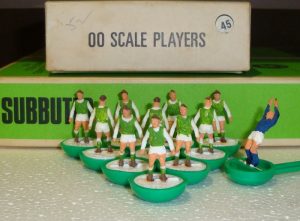 It’s a pity I couldn’t squeeze Hibs a bit higher in the list as the Leith club has been tremendously consistent when it comes to Subbuteo.

The Famous Five were wowing Easter Road’s visitors in the 1940s and 1950s and from that day Subbuteo teams have featured a green shirt and white sleeves.
The best Hibs team to buy is probably from the 1970s and I’ve spotted sets for around £30. A veritable bargain when you look at some of the other Scottish sides from that era.

A lightweight set from the 90s will be about half that price. 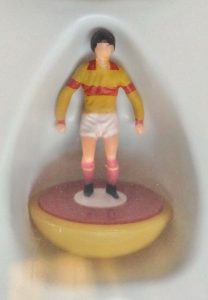 I’ve gone a bit off piste with the Motherwell selection. That is because a modern version comes in a 1980s-style box. That sort of counts, right?

The reason is Motherwell’s title-winning team of 1931/32 has been selected for the La Leggenda range, a collection of the best club sides in world football.

The kit itself is spectacular; Motherwell’s deep yellow shirts include a single maroon stripe across the middle. A unique colour combination and a classy design for the club put them in the top six. 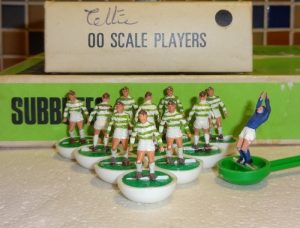 Celtic get bonus points for being the main team when you think of green and white hoops. It’s also been listed as Yeovil and QPR away but the Bhoys are the go-to team for anybody with the lightweight set.

The classic design hasn’t changed much from the 1970s and the heavyweight period right through to the modern day in fact they all use reference 25. It’s not a rare set and it loses points for that but a clean design and iconic shirt are enough for a top half finish.

However, the original 1960s set is the best around, not least because it represents the incredible Lisbon Lions and their demolition of the infamous Catennacio system used by Inter Milan in the European Cup Final. 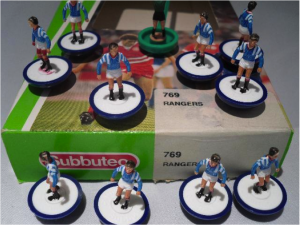 It may be somewhat controversial to have Old Firm rivals Rangers ahead of Celtic but the reasoning is simple; the 1990s version (ref: 769) of Rangers has some nice detail.

For example, the three Adidas stripes down both shoulders give it a unique feel, while red highlights make it one of the more intricate kits around.
Rangers were enjoying an incredible period of dominance in those days, but were dropped by Subbuteo when they were demoted three divisions. A bit of a blow for the boys in Blue but at least they have this kit to fall back on. 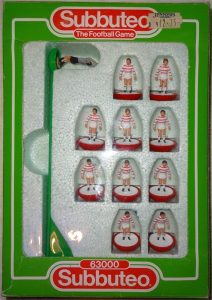 Probably the team with the best name in the top division of Scottish football also has one of the rarest sets – a black shorts version from the 1960s is incredibly rare and valuable.

The lightweight versions of the 1980s (ref: 183) are a bit more affordable and come with a nice red and white hooped pattern. A clean, attractive kit that is fairly unique in the world of Subbuteo. You can get one for around £30 if you’re lucky. 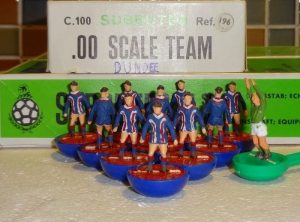 Look at that detail on the 1970s Dundee Subbuteo set (ref: 196). A dark blue kit with curved white and red lines are like nothing else around.

The set came a little bit after the glory days of Bill Shankly and thew famous 1962-63 European Cup semi-final but does fit nicely around th eera when Dundee won the League Cup against Celtic.

The set itself is incredibly rare, with a price of £140 listed on Subbuteo World for a good condition team. 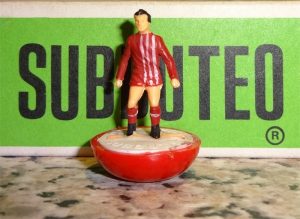 Aberdeen originally used the standard red shirt/white shorts heavyweight set in the old days of Subbuteo. Get to the 1980s and Alex Ferguson’s conquerers of Europe justified their own kit – and it is the nicest Scottish kit around.

All red with three hand-painted white stripes down the shirt and shorts, reference 193 is a collector’s dream.

There are full teams listed at £125 and £175 on eBay, making them the most expensive side in Scotland.

For cheaper versions you can get a modern Top Spin side painted in the same style for around £10-£15. The lightweight teams from the 1990s double up as Wales and a couple of others but really don’t live up to the glory days of the 1980s.