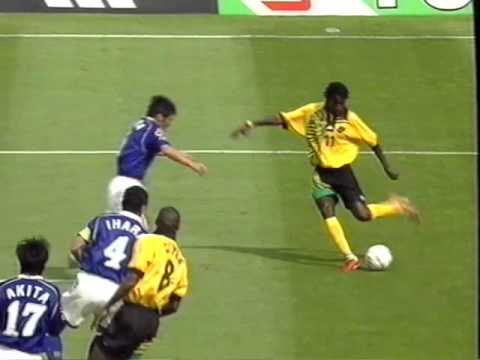 Cast your mind back to the summer of 1998. A giant football-playing chicken was launched as the World Cup mascot, Subbuteo actually produced a passable set to celebrate the tournament and one team was charming everybody.

Jamaica is no stranger to sporting success. It is a nation of sprinters and who can forget their conversion to bobsleighers the greatest film ever made – Cool Runnings?

It also never gained its owned Subbuteo team – until now.

An officially-approved Jamaica 1998 Subbuteo team featuring the classic Jamaican-flag kit worn by the Reggae Boyz in the tournament is set to be released this week and the first pictures look fantastic.

The set is the latest in a new 80-strong range of classic international teams released by Italian company Centauria with permission from Subbuteo.

The new Subbuteo La Leggenda Platinum Range is the only new official Subbuteo currently being produced but it is only on sale as a part-work released every couple of weeks with copies of Gazzeta dello Sport in Italy.

Only 80 teams will be produced including the likes of England’s 2018 World Cup side, Wales 2016, Croatia, Egypt and Nigeria’s famous Nike kit from the 2018 World Cup.

They are based on the old Subbuteo heavyweight teams of the 1960s and 1970s and are incredibly detailed. They also come in classic Subbuteo-style boxes and each team has its own booklet showing tactics and interesting information.

The Jamaican team is likely to be one of the more popular due to the iconic kit of the 1998 World Cup. The Reggae Boyz were universally supported at the tournament and despite losing against Croatia and Argentina, they did manage to beat Japan for their first ever World Cup win.

The squad was made up of several British-based players including Wimbledon’s Robbie Earle and Marcus Gayle, as well as Frank Sinclair, Deon Burton and Ian Goodison.

The Subbuteo La Leggenda Platinum Edition Jamaica team will not be on sale in the UK but sellers on eBay are selling teams from the range for around £20 including delivery.