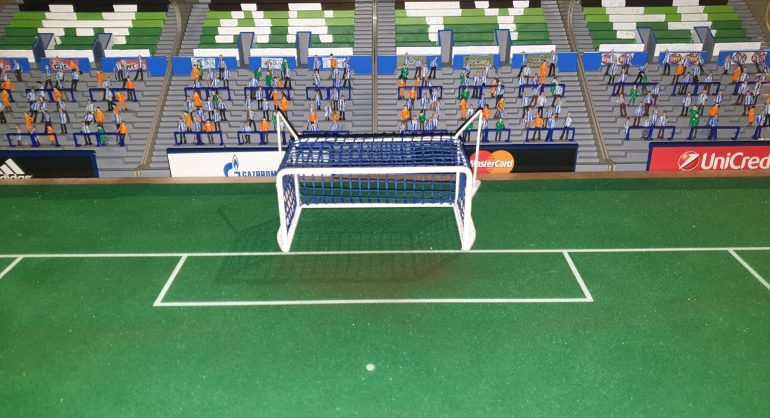 Another day, another Subbuteo stadium.

This striking lower league style ground was shared by David Fairley and we love it. From the giant names painted onto the stand seats to the tiny details like advertising hoardings and crush barriers, the stadium gets better the more you look at it.

So we asked him how and why he built his stadium.

He says: “My Dad started a project on a Subbuteo stadium, and until then i hadn’t played the game in years. After taking the piss out of him a lot, we then had a couple of games and suddenly i was hooked on the whole thing and was buying teams, painting my own fantasy teams and had a design for a stadium for my main fantasy team I designed to play against him; “Dynamo Nubbins FC”. Fair to say I’d picked up the obsession again.”

The inspiration from the design comes from Yorkshire which may come as no surprise given the name of Nigel Martyn adorns the Kop stand.

David says: “Making it different from my dad’s as he went for the Elland Road look, I looked more to making a quirky version of the Shay Stadium in Halifax and eyed up the details more to make a lower league sort of vibe so we had diversity.”

“I chose the colour scheme, made the stands different and wanted to have names spelled out on the seating as well like grounds do. Installed a couple of standing areas and bought some standing fans off S66Owls (an eBay seller and painter of fans for Subbuteo) for the different look, painted a truck load more, and had to pay homage to my biggest hero Nigel Martyn with the Kop stand being in his name and the colours of his arguably most famous shirt.”

You may have noticed at this point that some of the features are not official Subbuteo products. So David let us in on some ground building secrets.

“The method; bought the crush barriers and the girders for the roof off subbuteostadium.com, i sprayed all the stands in grey undercoat to get the concrete effect, then used paint to add the seating and design colours. Cut the champions league ad boards and stuck them on the front of the stands, and printed stickers for the ones half way up the stands with personal logos.

“I’m still working on getting the LED strip lights installed but secretly waiting for post-lockdown so my dad can do that but as it’s so fiddly. To finish the look, i used dark earth on a Pegasus plain pitch to get the muddy lower league pitch effect.”

The pitch is the icing on the cake for this dream Subbuteo ground. We’ll be stealing the crash barrier design for our own build, and I’m sure all stadium builders will be keen to try out some of the techniques employed on David’s superb fantasy ground.