If Hasbro stopped making Subbuteo it might save the game

Ask a Subbuteo fan of different ages when the table-top football game reached its peak and you’ll get a number of different answers.

Older players will describe the soul of the hand-painted heavyweights, while those in their 30s might argue the ability to curl and manipulate the detailed lightweights represent a peak for the series.

Many argue the Hasbro days of the late 1990s were a low point, while others suggest modern takes such as Parodi and Zuego are perfect for the serious player.

With Hasbro struggling to produce sets outside of the Spanish League and bigger Champions League sides, a lack of new catalogues and a website that could do with an upgrade, is it time fans became the driving force behind the game?

Subbuteo collectors will probably tell you the interesting stuff was made before 2000 in the world of Subbuteo. While some modern box sets are worth a look most people want the old set from their childhood when looking to pick up a bargain.

The Subbuteo community is small but active -and it knows what it wants.

In Football Manager makers Sports Interactive actively embrace the community. The message board is a trouble-shooting forum where fans can report to the makers of the game, thousands of people actually scout for the game and a massive community of fans create databases of players, kits and logos to keep the game up to date.

Lego is the same. We mentioned this before on the blog but Lego’s vote to see the next creation they build is hugely popular and ensures fans choose what is being built and sold.

In Warhammer miniatures are sold blank, with paints and guides available to create your own armies.

Just look at the success of Minecraft to see how a community can often take what the creators put out and do unexpected and interesting things with it.
None of these things are as fun as Subbuteo (although FM runs it close) but the ideas are strong.

So here is my idea. Why doesn’t Hasbro loosen the licensing a bit and take a step back from team production entirely? We all want new sets but they just can’t seem to get it right.

Instead they could switch manufacturing to blank, customisable players and bases at a much lower price.

I would be willing to bet the community will step up. Painting services, decals and advice would flourish under new Subbuteo, while new collectibles would emerge from the makers who can build licensed (by Hasbro) official teams and sets in small numbers with high quality production values. 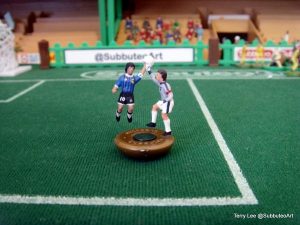 In fact, it would be a return to the days of hand-painted Subbuteo sets in limited numbers. Finally Subbuteo would become a quality collectable again. Built by the fans, for the fans.

They could go one further and release 3D printer guides for Subbuteo to licensed makers to produce their own teams and accessories. Let them use the official Subbuteo logo and see what is produced.

Subbuteo could grant licenses to the T-shirt makers, the modellers who produce famous Subbuteo moments and the experts producing 3D-printed giant players like the one I spotted on Twitter earlier:

This is where the community comes in. Revamp the Subbuteo website to become an Etsy-style shop window for the makers and painters of the game. Once somebody has a licence they are subject to a voting and review system by the community that would show who is Gold standard.

The website would be a modern version of the Subbuteo catalogue. An official place to see what’s new in the world of Subbuteo for the digital age.

Each new designer with a license could have their own mark like jewellers and artists. In 30 years time people may want a rare 2018 Manchester City done by a certain maker, for example.

Hasbro could charge for a license and a cut of any sales. After that their only role would be to produce blanks and quality check the makers on occasion. It means they keep control of the brand but it becomes a thriving, interactive community once again.

It will never happen of course. The idea is full of legal holes and counter-arguments. But I thought it was a good starting point for a debate about new Subbuteo and the strange ‘hands-off’ and soulless feel I get when I buy a modern and official Real Madrid box set.

If you have a better idea please share below. Let’s get the conversation moving!