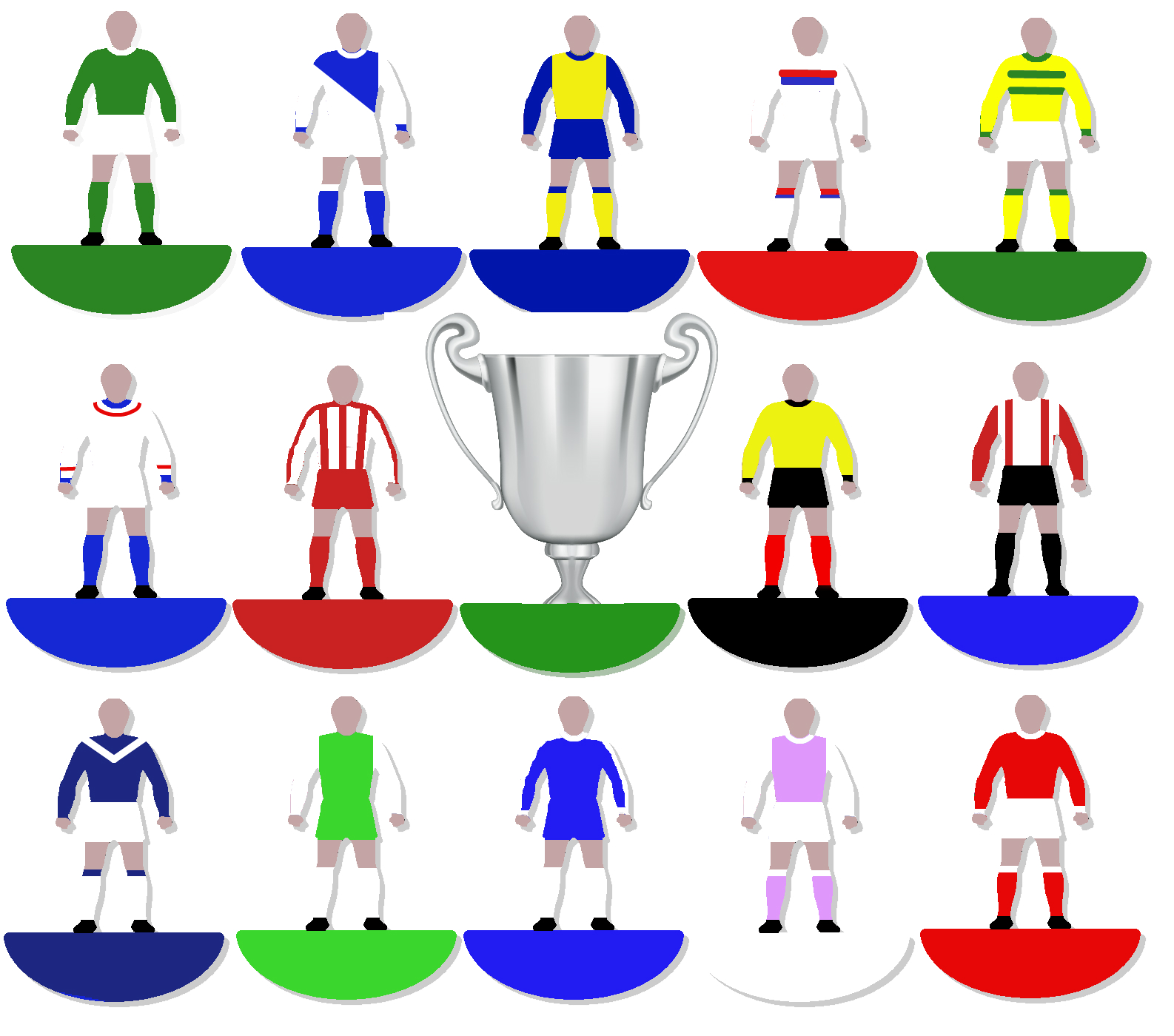 The Subbuteo Cup first round draw

The draw for the Subbuteo Cup first round is now complete and we have some amazing ties to share with you.

You can see the draw in full here thanks to the brilliant Subbuteo Collector. Please watch and subscribe to his channel below.

Here is a full list of teams and the kits to give you an idea of what colour each team wears.

Manchester United taking on Sir Alex’s old side in Aberdeen, Sampdoria versus Barcelona and big matches for Garstang FC and Cheltenham Town have made for an interesting draw. You can see all of the fixtures below.

Union Berlin are everybody’s favourite German side and they travel to Premier League Norwich for the first tie out of the hat. Both teams were nominated for qualification by our players.

Another two nominated teams and a very old school cup tie between Premier League Chelsea and League One Blackpool.

Sampdoria, one of Subbuteo’s most famous kits, take on Spanish giants Barcelona. Sampdoria qualified via a Twitter vote, while Barcelona knocked out Real Madrid on Twitter to qualify for the first round.

Athletic Bilbao will travel to Birmingham City in a weird sort of Intertoto Cup-style fixture.

Crystal Palace vs B36

Semi-professional Faroe Islands side B36 Tórshavn are one of the more interesting teams in the draw. They play in a Real Madrid-esque all white kit.

Scottish giants Rangers knocked out Dundee in the Twitter-based vote to secure a place in the first round.

A Midlands derby and a match up of two teams with a host of beautiful Subbuteo kits. Remember that Coventry Talbot number?

A dream tie for Cheltenham Town as they take on Italian giants AC Milan. Cheltenham one of the few teams in the draw to never have a dedicated Subbuteo team.

Another of the all-time classic Subbuteo kits as Bristol Rovers take on AFC Wimbledon, sporting a classic kit they shared with Italian 1985 champions Verona.

Fun fact. This stunning Borussia Monchengladbach kit is Gigi Buffon’s favourite Subbuteo team. He has over 500 and supports the German side because of playing with this set in his childhood.

The only Irish entry into the first round draw is Glentoran – here using Maritimo’s Subbuteo colours because it was the closest kit I had to the famous red and green colours.

For once Leicester City are not the underdogs as Staffordshire-based part timers Kidsgrove Athletic embark on an historic cup run.

And another as Everton travel to London hoping to avoid an upset.

Another derby! This time QPR vs Luton is a strong 1980s vibe. QPR are the team supported by Subbuteo founder Peter Adolph.

We are guaranteed an Italy team in round two after this tie. You are, however, not guaranteed I have an image of a Fiorentina kit so here’s Austria Salzburg instead.

There was a short window when this would have been a tie between the two best teams in Europe. Both are Subbuteo giants and this should be a well-supported tie.

The third Glasgow team in the draw and one of the best Subbuteo kits around, Partick take on Premier League Burnley.

Dundee United have one of the best Subbuteo kits around. Huddersfield share reference 003 with quite a few other teams.

A tie that has cupset written all over it. Just look at that stunning Wycombe kit.

Another non league team enters the draw in Maidestone United. They take on Nottingham Forest.

Are Scottish kits just better than others? Another stunner from Forfar and a truly bizarre match up with Tranmere Rovers.

Wellington Phoenix are travelling the furthest to take part in the tournament. The New Zealand side plays semi-pro side Eastbourne Town, who went viral this year with a brilliant Subbuteo-themed match day programme.

What a tie for Lancashire part-timers Garstang FC! The club was supportive of the cup on Twitter and has now got a plum tie against Sheff Wed.

Clash of the barcodes as Newcastle take on PAOK of Greece. A 1990s UEFA Cup tie if I ever saw one.

Racing de Santander are nominated by our only Spanish player, while Eintracht Frankfurt have a stunning black, white and red kit.

Only in the Subbuteo Cup will Fabio Cannavaro, Tino Asprilla and Lillian Thuram’s Parma travel to the Kit Kat Crescent to take on York City.

The Sir Alex Ferguson Derby is here. The final teams to be drawn have set up a tasty tie between the legendary manager’s former clubs. With Fergie time this one could go on all weekend.