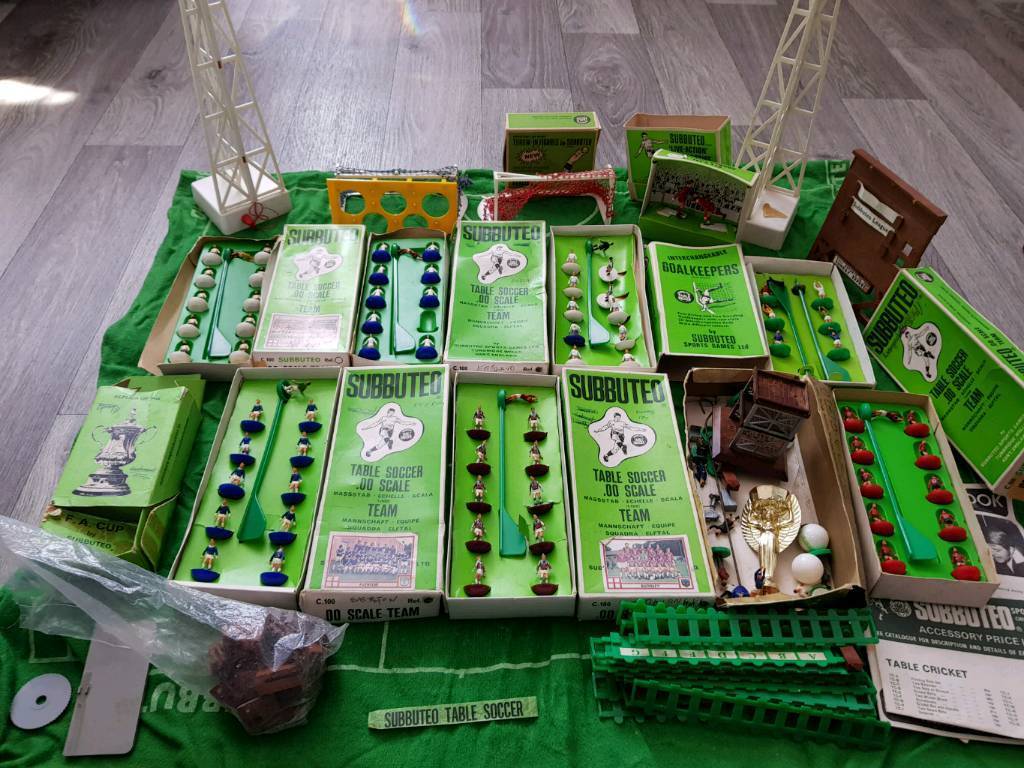 If, like me not so long ago, you are new to Subbuteo collecting then you might be wondering where to go to get a bargain.

The traditional method of heading to a local toy store is probably not on the agenda anymore. In fact, I don’t know of any shop that actually shops old or new Subbuteo in store.

Instead it is time to turn to the wonderful world of the internet. There are a few sites offering Subbuteo old and new so I thought I’d round up my favourite places to grab a Subbuteo bargain in the UK.

If you are looking for where to sell Subbuteo head here or feel free to email us on subbuteoonline@gmail.com.

Most of the Subbuteo items I buy are from eBay. It’s the world’s biggest auction site and is probably the first place to check when it comes to finding Subbuteo.

There are hundreds of Subbuteo items on eBay but be warned – lots of people find their old Subbuteo in the loft and think they can get astronomical amounts for it. Prices are often quite high and the eBay community is awash with scammers, repaints and inaccurate descriptions.

Most items will have RARE VINTAGE and UNIQUE splashed across – even if it’s a standard blue team made in the millions in the early 1990s. Just because the seller has a read ‘A Dummies Guide to Selling on Ebay’ doesn’t mean that set is actually rare.

Check Peter Upton’s site and search eBay’s vast archive of past sales to see if it is actually rare or unusual.

The trick is to be patient, do some research and make sure what you’re buying is genuine. Check previous prices and make sure you are paying a reasonable amount.

If you really want to get in to eBay buying try filtering by ‘Auction only’. This cuts out a lot of the professional sellers who buy cheap and hike prices up,
You may also want to search for mispellings of the word Subbuteo. I often find bargains under the spelling Subutteo because nobody else is looking.

Gumtree is a bit like eBay but most of the items listed are pickup only. There is usually a small handful of items listed for each area and many of them are job lots.

You will still get the same ‘RARE VINTAGE’ nonsense but usually sellers are people who have dug it out the loft and aren’t really interested in the game anymore. That means there may be a bargain to be had – although the fact it’s usually meet in person means you should follow the usual rules.
That includes going with a friend and being wary that if something looks too good to be true it probably is.

Facebook Marketplace is a bit of an untapped treasure chest for Subbuteo collectors. More and more people are turning to Facebook to sell old Subbuteo and there are plenty of good deals on there.

You’ll probably be paying towards the top end of eBay prices but job lots to represent good value on occasion.

My advice? Avoid sellers who list it for free or £123,456. Generally they are after eye-watering prices and their desire for ‘reasonable offers only’ tends to be not reasonable at all. If somebody doesn’t list a price, it’s usually a good way to spot a chancer looking to make big bucks from Subbuteo.

Of course this goes both ways. With all three auction sites you should try not to be rude making derisory offers. It’s always good to haggle and get a good deal but try not to be insulting or to ‘trick’ people into selling their collections at a low price.

These are the three main ways I find Subbuteo. Occasionally there will be a set in an antiques or charity shop and I will snap them up. I recently found a Santos heavyweight team after chatting to the owner of an antique shop who dug out his old collection.
However, this is quite rare for the older, more valuable stuff. I’ve noticed lots of charity shops have started selling on eBay so it’s always worth dropping off your details so they can contact you first before doing so.

Probably the biggest and best Subbuteo-only site around, Subbuteo World has a huge collection of Subbuteo items for sale.
You will pay more here. I’ve seen some quite high prices for teams and accessories but you do get piece of mind that it is genuine. You also avoid the headache of a bidding war on eBay.

Subbuteo World also holds a Subbuteo Fair near Sheffield. I’ve not visited (yet) but it looks like a brilliant event and a great way to find a bargain. You can find out more on the Subbuteo World website.

Argos has started to use eBay to sell Subbuteo and the catalogue store also stocks a small range of the new Paul Lamond sets.

They are not particularly cheap and the newer Subbuteo is not really my thing – but a starter set for £30 is not bad. There are also some nice Champions League editions available on the Argos website. 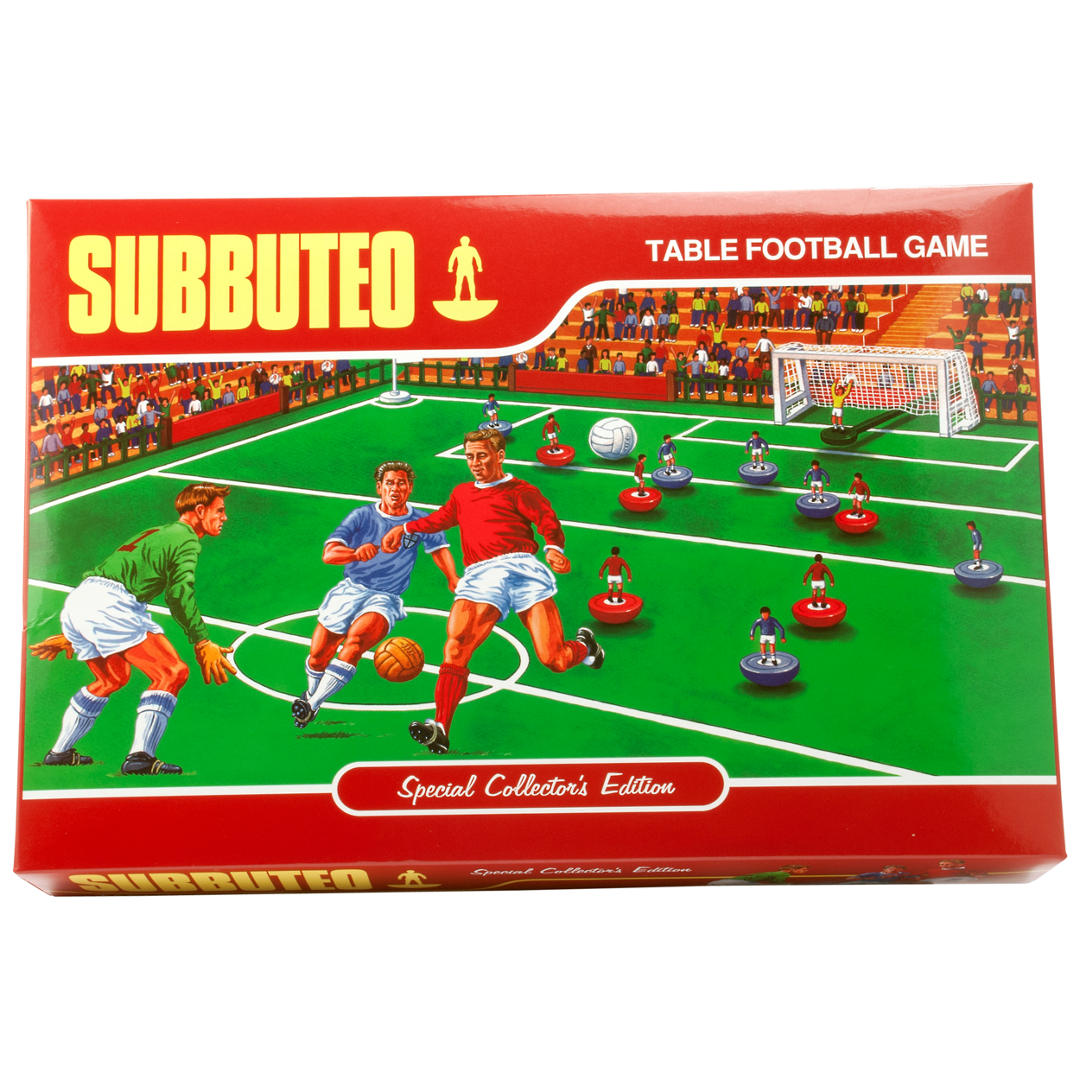 John Lewis has relaunched its exclusive vintage Subbuteo box set in time for Christmas once more. At around £30 it’s not cheap but it is a pretty nice product. The box is done in the classic Subbuteo advert style and the Brazil and England teams included in the set are good quality.

The pitch is smaller and thinner than usual but the rest of the set is a nice little modern collector’s piece.

When you join the official Subbuteo Club you get sent regular offers and discounts on Subbuteo. A recent offer was from Spanish retailer We Are Games.
The offer was 30 Euros for 16 club Subbuteo teams, and the same price for 16 international teams. The teams are from the La Leggenda range of the late 2000s and are superb quality.

With a bit of trepidation (the order form is completely in Spanish) I ordered the club sets and within a week they arrived in perfect condition. It looks like a trustworthy site for Subbuteo accessories and teams.