The dark blue shirt with single thick yellow hoop has been the watermark for beautiful South American kits since they adopted the current style in 1913.

The Azul y Oro are one of the best-supported teams in Argentina alongside River Plate and the 49,000-capacity La Bombonera is an incredible stadium with steep sides that resemble an old sweets container. During big games it is awash with ticker tape, flares and a spectacular roar from the passionate fans.

Recently the iconic shirt has been worn by Gabriel Batistuta, Juan Roman Riquelme and, of course, Diego Maradona.

If that is not enough to make the team the hipster’s choice then the latest shirts should do the trick. For 2018 the club has released a new take on the classic blue and yellow, with Qatar Airways as a sponsor this time.

The away kit is even better, a white shirt with blue stripe surrounded by a yellow faded pattern has to be one of the best kits in world football. 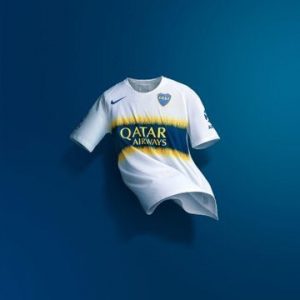 Boca Juniors were introduced to Subbuteo around 1978 just in time for the 1978 World Cup in Argentina, along with Estudiantes La Plata, Independiente, Newell’s Old Boys, Rosario Central and San Lorenzo. River Plate were much earlier with the first teams produced in 1969.

It was good timing for Boca Juniors, who had just won the Copa Libertadores. What better way than to celebrate with your very own Subbuteo team?

The team is reference number 295 and can fetch as much as £80 on eBay – making it one of the rarer teams to find for heavyweight collectors.

Boca Junior teams are a bit of a conundrum for collectors. Repainted versions are aplenty on eBay and other sites and it’s rare to see an original heavyweight version in the wild.

Luckily, Subbuteo didn’t abandon Boca Juniors when the lightweight teams were introduced and a box set from around 1982/83 is a nice example of a Subbuteo Boca Juniors team.

Boca returned to Subbuteo in the era of lighweights in the late 1990s – my favourite era for collecting. Referenced as 793 the team was launched around 1997. Luckily, this is just in time for Diego Maradona’s football swansong in the famous jersey. 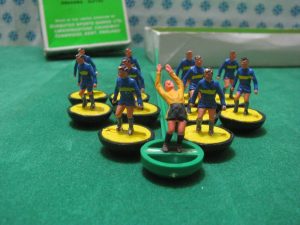 You can get the modern Boca Juniors side in Subbuteo for £35 off Subbuteo-Emporium or gamble via eBay.

An alternative is to buy the Boca Juniors 2003 La Leggenda team – a range celebrating the best club teams in Italy and produced under licence in Italy. 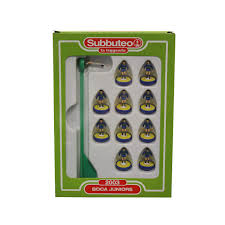 The sets are nicely presented and that particular Boca side was a spectacular team, beating AC Milan on penalties to win the Intercontinental Cup, the precursor to the World Club Cup.

They are number 50 in the La Leggenda range and are widely available.