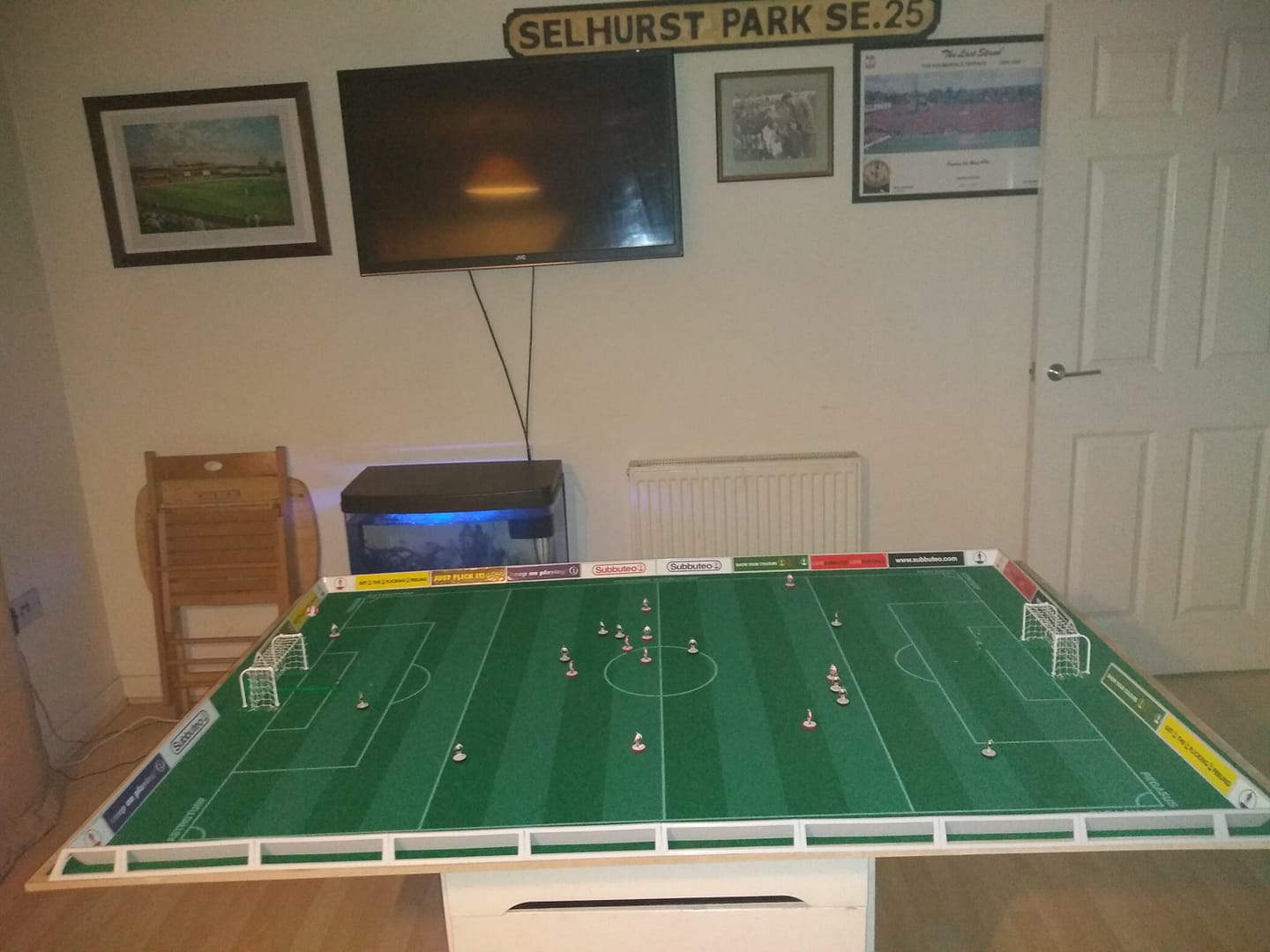 The first Subbuteo Cup 2020 stadium has been revealed – and now it’s time to view the rest.

Around 50 Subbuteo players will be flicking off on Saturday 4 April for the first ever Subbuteo Cup 2020. It will be a bit of a distraction from the current social isolation many of us find ourselves in but that does not mean the players will not be taking it seriously.

You can see the 64 teams taking part here and see how the tournament works here.

The first Subbuteo Cup 2020 stadium is the impressive White Street Green Stadium, built in time for the beginning of the tournament.

A second venue will be located on the Fylde coast in the North West of England. Steve Lukas has constructed the compact but beautiful Stadio Deluka.

He says: “It never rains so should be perfect tournament weather.. we are still waiting agreement with more sponsors and the boards will be up very soon.”

What’s that? You want more stadiums?

Andy Newman has this amazing video from before a Euro’s 1/4 final between Sweden and Italy..

The stadium even looks like it’s high up in the Alps with that backdrop, while the Euro scoreboard is a nice touch.

And just look at those goals! The stadium is called the ‘Kedleston Stadium’ in Derby.

He says: “My Son suggested we dust off the Subbuteo a week or so ago. We decided to hold our own Euros tournament, picked 16 countries most of which had already qualified, we’re now at 1/4 final stage.”

Trevor Stevenson’s beautiful stadium terrace may be missing a roof – he says it was ‘accidentally’ binned – but it is the largest of the revealed stadiums so far and even has a decent crowd despite warnings about self isolation.

And just look at those Italia 90 goals and Pegasus Astroturf pitch. There will be plenty of teams hoping to play here in the first round.

Wade Moreton’s Canalside Selhurst Park is a wonderfully put-together stadium with beautiful goals, modern advertising hoardings and even a giant TV for the fans to enjoy replays of the goals.

As probably the cosiest stadium of the lot, this will be sure to be a great backdrop to the first round of games.

The old school, terraced stadium is a thing of beauty and we are proud to announce it will be hosting Subbuteo Cup 2020 games.

He says: “The Goldstone will be delighted to host games in a traditional old league ground with a mix of standing and covered seating. No padded seats here though.”

Stephen’s is not the only four-sided ground to appear in the Subbuteo Cup 2020 first round. Rowland Lyons will open the doors of the wonderful Le Stade 2020 uses beautiful France nets and modern Subbuteo stands.

Paul Hare has a warning for the big boys visiting Park De Pendle.

He says: ” Park De Pendle pitch in East Lancashire. Looked after by the council, been promised new goals since the early 2000s. Cobbled together from various sets. The pitch is a real leveller, no big footballing team would want to drawn to play here. “

Jason Christopher is awaiting some last minute work on his stadium. He says: ” My ‘stadium’ currently under development awaiting garage clearout before the actual build begins…”

It actually looks quite nice to us already. Look at those Panini hoardings!

The winter pitch caused a sensation with Subbuteo shoppers earlier this year. David McCartney has his set up and it looks incredible. The first winter tie of the tournament will take place here. Better crack out the orange Tango!

Neil has kindly shared his Smithfield Stadium. He will be hosting a first round game in this incredibly detailed arena.

Chris, who runs the superb Garage Soccer in the US, has shared his pitch with a beautiful Florida sunset as backdrop. Just another reminder that we’re all in this lockdown together across the world.

Last but not least is an intriguing entry from Chus Pelayo Valdeolivas, who will be taking part from Santander in Spain.

His stadium, Winterfell Park, will be ready for the first match and he has left us with just one clue about how it will look before the big kickoff.

We have one more big surprise. Keep your eyes peeled for the big reveal of our final venue. Move over Wembley, because we have found a Subbuteo stadium fitting for such a major event.