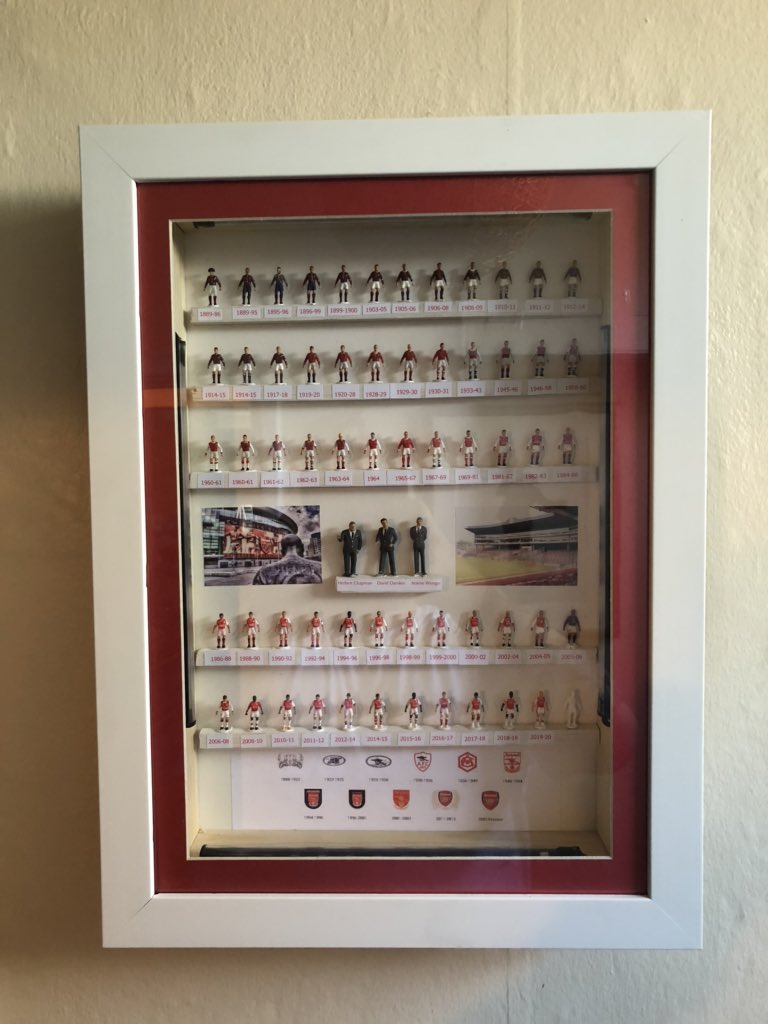 As Subbuteo’s popularity plummeted around in the 2000s one thing continued to prove to be a hit.

Subbuteo displayed tapped into that love for nostalgia that seems to have swept across football culture in recent years and spectacular posters, single player displays and pieces of art are being produced across the country.

But it will be a long time before you see a piece of Subbuteo art as spectacular as an Arsenal display featuring the club’s kits right back to its foundation, as well as some of the club’s most iconic managers.

Subbuteo Art (@SubbuteoA) first revealed a sneak peek at the stunning Arsenal display on Twitter and we can now show it in all of its glory.

Subbuteo Art says: “It’s a history of Arsenal kits from the beginning until now with three of the clubs most important people mounted in the middle, it has lights mounted inside the frame, every figure is hand painted and model on players at the club at the time. It took about 6 weeks from start to finish.”

The frame looks great when it is lit up and even features managers such as Arsene Wenger and Herbert Chapman – two of the greatest managers the English game has seen. The other central figure is David Danskin, the man who founded Dial Square FC, the club that would later become Arsenal.

The kits are a Subbuteo history of the famous red and white colours of Arsenal, going from the beginning to the modern kits we see today. It is nice to see the maroon kit, worn to mark the club’s last season at Highbury, has been lovingly recreated as part of the display.

The good news is while this one is being kept in his private collection you can get one made to order for any club.

He says: ” Initially it was made for myself but a few mates saw it and asked for one for themselves so this will now be for sale and made to order with any club in the U.K. available. I’ve just started a Spurs and Chelsea ones. This particular one will stay as mine as like any artist there’s loads I’m not happy with and want to improve.”