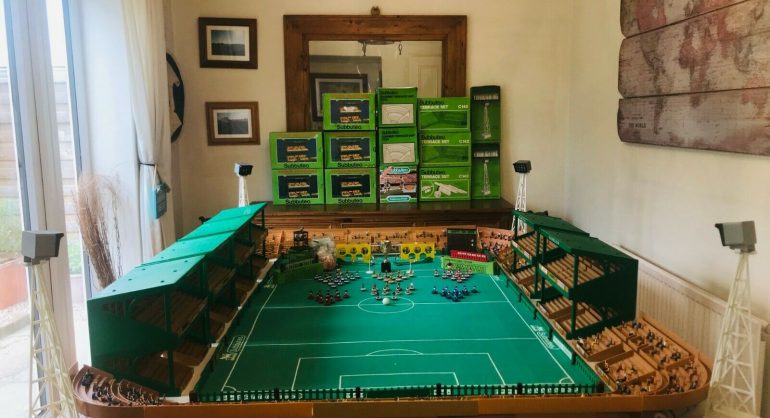 The most expensive Subbuteo sales since lockdown began

Have you noticed the price of Subbuteo recently?

It is a bit of a double-edged sword that the more people we can convince to join the growing Subbuteo community, the more demand will push prices of certain accessories and teams upwards.

While there are still bargains to be had it is clear the price of certain teams, grandstands and trophies are on the rise and that is reflected in eBay’s sales data.

We’ve taken a look at the top seven biggest sales since lockdown began in the UK and you may be surprised by the eye-watering prices fans of the table top game are willing to pay.

Highlights include a full stadium set up, plenty of rare teams and a bag full of plastic fans.

I love the images associated with this £500 job lot because it includes an actual duffle bag full of Subbuteo fans.

They can get expensive, so that’s a nice addition to a job lot that already has seven blue and red grandstands – and prices for those are skyrocketing to around £75 each on eBay at the moment.

There are also players and other bits to help bump the price up to £500. You can see it here.

This is how to do a Subbuteo eBay listing. The seller has good pictures and a detailed description of each team – so no frantically searching Peter Upton’s excellent site before you make a bid.

£560 for the lot seems like a fair price for a lot of good Subbuteo. You can see it here.

Why collect all the bits you need when for a little under £700 you can buy an entire ready-made stadium from eBay?

The stadium looks in excellent condition and the seller says the floodlights are all working. It’s beautiful to look at and I can see why somebody was tempted to splash out.

With stadium pieces selling for up to £75 separately this probably worked out cheaper to buy in bulk.

You can see it here.

I count over 35 teams plus a bag of loose players, as well as a host of accessories in this job lot.

As you look through them this seems to be more and more of a bargain. Half the teams look like they’ve never been played with and there is a good collection of rare colours in there to keep collectors happy.

A nice Jules Rimet trophy and some other bits obviously bumped the bidding up further.

A hefty Subbuteo job lot with 16 teams – some of them rare – and some nice accessories. For over £800 it is a big price to pay but the hooligan fences, VIP set with trophy intact and seemingly high quality of the other bits make it a tempting lot.

The teams include some notable and rare South American heavyweights such as Santos and that has clearly added to the price.

Not strictly a Subbuteo product as New Footy was a Liverpool-based rival to the game.

It did come first however, and a wartime set listed by a seller from Italy is an amazing bit of table football history. The price of £1,350 reflects the rarity of this box.

This one looks in good condition and it is a real collector’s item for Subbuteo historians. That’s still a hefty price tag though.

You can view it here.

The most expensive Subbuteo sold in May on eBay was a massive job lot of over 36 heavyweight teams. However, at nearly £2,000 the price will still come as a shock despite the vast haul of Subbuteo on offer.

I’m always amazed that somebody can list Subbuteo worth seemingly £2,000 and not even bother adding a subscription. A simple ‘see pictures’ says to me they may be misleading, or the seller is going to be too lazy to look after the items in the way I would wish.

That hasn’t stopped one buyer, who doesn’t seem concerned that the majority of rare teams listed on the boxes are not actually visible on the pictures. It’s an astonishing bit of trust when shelling out this sort of money.