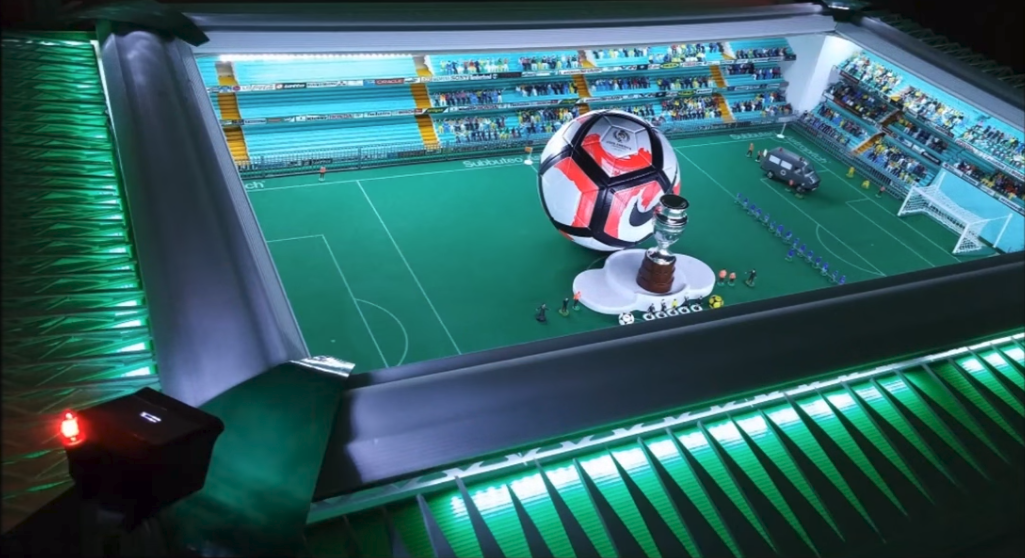 Subbuteo stadiums usually comprise a pitch, some floodlights and the odd stand filled with half-painted fans.

That is absolutely not the case with one fan of the game from Italy, who has built an incredible stadium that has to be seen to be believed.

Domenico Piacentini has built a spectacular Subbuteo stadium that includes massive hand-carved stands, an electric roof that opens and closes and even a working cable car outside the stadium.

Named the Arena San Antonio, the stadium features an impressive LED light display for night-time games but the real highlight is that roof, which is the first we have ever seen that opens and closes automatically.

Old-style crowd barriers and even a painstakingly hand-painted marching band give it the feel of a South American stadium and that is exactly the effect Domenico was going for. He told Subbuteo.Online: “The cover is obviously the most original part due to the lighting effects; I took the idea from the Beira Rio Stadium in Porto Alegre – Brasil.. .. obviously in a night version.”

Outside the stadium he has included an impressive front gate and even a working electrical cable car and landscaping.

The three-tier stands were all hand-built and Domenico says the stadium took him a year. He says: “I worked there only on weekends and so it took me about a year to do it. The stands are made of wood; all strips of wood cut and finished by hand.”

Thank you to Domenico for sharing his beautiful and unique Subbuteo Stadium with us.

If you want to see more check out the best Subbuteo stadium ever made, the recreation of Brighton’s former Goldstone Ground or the Goodison Park stadium.